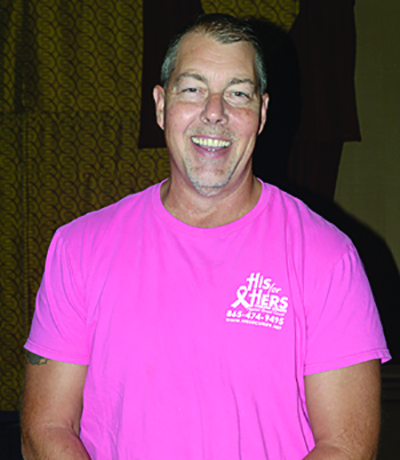 Scott Brockamp
Farragut businessman Scott Brockamp once again is challenging the community to donate to fight cancer with his campaign, “Real Men Wear Pink of Knoxville.”

The campaign, which kicked off Aug. 27, will continue through Thursday, Oct. 31.

“It’s just a group of businessmen and other individuals who are willing to donate some time to go raise some money and really bring awareness to breast cancer, and not just women and men who are affected by breast cancer, but to help raise money to fight for a cure,” said Brockamp, who co-owns His Security.

“We live in a day and age where everyone is affected by cancer in some way, shape or form.

“The neat part about this campaign is the money that we raise will actually go to our American Cancer Society,” he added. “It stays here in our community, and so it’s serving those who are in our community who have been affected by cancer, whether it’s breast cancer or any other form of cancer.”

This is Brockamp’s third year heading a campaign.

“When I was first approached about being able to do this or would I be willing to do it, I had actually just rekindled a friendship with one of my high school best friends,” he said. “At the time that we reconnected, he had just found out that he was diagnosed with two different forms of cancer.

“He was fighting for his life at that time,” Brockamp added. “It looked like things were going good. Then, at the end of August, last year, he lost his battle to cancer.

“A lot of my conversations I had with (the friend) was ‘this is where you can go to get help. We may not be able to cure you, we may not be able to find what you need right now, but there are people who are there to help you walk through it and help provide with the things to make you as comfortable as you can and take as much of the fear out of it as possible.’

“Last year was a great year for us,” Brockamp said. “We raised a little over $20,000, so I’m hoping we can get some folks to help join in the fight and really make a big impact this year.

“I was informed (at a kick-off party Aug. 27), there would be some type of crazy antics that would be involved,” he added. “... Normally, we just put the challenge out there to raise enough money, and I do something crazy for the duration of the campaign.”

The group is planning a fundraising dinner starting at 6 p.m., Oct. 24. Proceeds from the event will go toward the campaign.