‘Shell’ing out some Farragut history 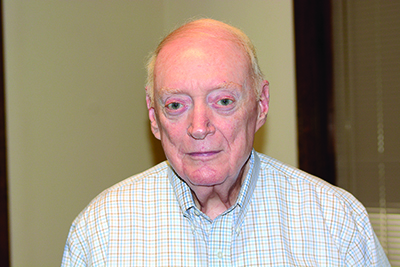 Malcolm Shell
Local historian Malcolm Shell, a 1956 graduate of Farragut High School and a graduate of the University of Tennessee, said he simply “wrote what I remembered. … I grew up in Old Concord” dating back to the early 1940s.

“When I was growing up here, Campbell Station was a dirt road,” the highly respected historian said. “… I remember when Turkey Creek was simply a lowlands with cattails — a swamp.

“That’s one of the problems they had developing it, it was a wetland.”

A little extra background on Malcolm Shell, a highly respect local historian and 1956 graduate of Farragut High School. “When I got out of the University of Tennessee, I moved to Washington, (D.C.), and took a job as an intelligence officer with the Defense Intelligence Division,” he said about this service “of about three years,” which began in 1966. But he labeled those three years as “too long.” Changing times are reflected in the numbers. “When I was a student at Farragut High School in ’56, we only had 32 students in our graduating class,” Shell said. Apparently a close-knit class, “We still met once a month, on the third Monday, at the Cracker Barrel for breakfast. … We’ll average 10 to 12,” he said. “Of the 32, we’ve lost 19.” Looking back on the push in late 1979 and early 1980 to incorporate what is now the Town of Farragut, “I thought it was a good opportunity to grow,” he said. “… Actually, we were more concerned about being annexed by Knoxville.” This weeks Foundations: 40 Years of Farragut podcast is presented by Mlily Mattress

“They owned that farm along with David Campbell, and they started a general goods store there,” added Shell, a resident along Fox Den Drive since 1972.

Pleasant Forest Cemetery along Concord Road “is the second oldest cemetery in the county,” said Shell, author of “From Frontier Forts to Town Hall: A Brief History of Farragut, Tennessee,” which was originally published in 2006.

“… The second governor of Tennessee (Archibald Roane) is buried there. … That cemetery has been there since the late 1700s.”

Going back to the 1800s in what was then Campbell Station — now Town of Farragut — “it was unlike any other little hamlet that you might find anywhere; Virginia, Tennessee or wherever,” Shell said. “It produced some very interesting people, people that became very well known, it was that unique.

“Of course, David Farragut was one of the most well-known naval officers in The Civil War,” he added.

Foundations for a Town

The foundation being laid for much of the Town’s development, Shell said, started after the Manhattan Project in Oak Ridge closed in the mid-1940s following World War II.

“Actually, people didn’t start selling property until after the Mahattan Project closed,” he said. “A lot of people who worked on the Manhattan Project loved the area so well they just decided to stay. … Mostly from the north, (they) were responsible for much of the Town’s growth (such as) the development, like the utilities and telephone and infrastructure of the Town.”

Within the framework of “Homecoming ’86,” the brainchild of then Tennessee Gov. Lamar Alexander to celebrate state history and traditions in 1986, “(then Mayor) Bob Leonard and Doris Woods Owens (long-time museum director) got together” to suggest an area to display Town historical artifacts, said Shell, who retired from the Oak Ridge Y-12 plant where he was a writer who also worked in public relations.

“The building behind the old Avery Russell House (aka Campbell Station Inn, corner of Kingston Pike and Campbell Station Road), which was a former dairy … is where they established a small exhibit,” he added. “The only thing they had were some books and things like that.

“It was well attended. So, after (Homecoming ’86) was over, we thought the interest in it was really good, so we would just continue this.”

As an early effort to obtain valuable artifacts, “We were able to acquire a collection,” Shell said about the efforts in the late 1980s of then Alderman Eddy Ford and his wife, Linda Ford, “who went to Washington (D.C.) to pick up this collection in a U-Haul and brought it back.”

During more than 20 years as Farragut Museum director, “Under Doris it really took off,” he said. “Mary Nell McFee was the first director. … Mary Nell provided some of the real artifacts that we have, like the original desk on (Admiral Farragut’s) ship. … We have had some nice contributions from people in the community and people outside the community.

“We were able to acquire some artifacts we didn’t have thanks to (then) Mayor Bob Leonard,” he added.

In fact, “We have the largest collection, to my knowledge now, that exists (Admiral Farragut artifacts),” Shell said.

“… Mayor Leonard was very helpful in getting us funding from the Town” for the museum.

Julia Barham, Historic Resources Coordinator, “Has done an excellent job. She has become a historian in her own right,” said Shell, who trains docents at Farragut Museum after having served the museum as a committee member for 17 years. “… And we have a great gift shop. … Frances Abel, she was the one that started it. She was the one who probably contributed the most to it because she did that for years.”

About another well-known and highly respected local historian from Farragut, the late Mac Abel, “Is really the Town historian,” Shell said. “… Everything I learned, I learned from Mac, he was my mentor.

“Mac taught me a lot about family histories. … Mac had an in-depth knowledge about each family,” he added, which included “the Callaway family (Callaway’s Landing in Concord near Northshore Drive) is a well-known family; and the Hobbs family.

About their relationship, “He was in charge of the libraries at UT when I was a student. … He grew up just about two doors up the street from where I lived in Old Concord,” Shell said about Mr. Abel. “He was a fine gentleman.”

“When I used to study at UT, in the library, he would always come by and just put his hand on my shoulder and walk past,” he added. “We didn’t have any long conversations, but Mac was someone that I knew.

“… Mac helped me with the editing and proofreading of my book,” he added.