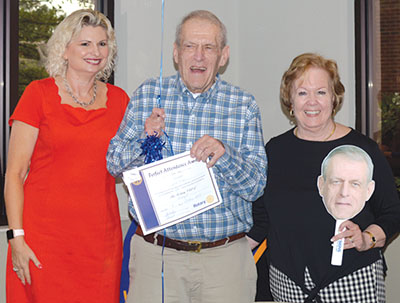 Staci Wilkerson, left, The Rotary Club of Farragut president, presented Dr. Jack Faber with a certificate for 50 years of perfect attendance in Rotary, as his wife, Jeannie Faber. stood beside him during RCF’s meeting at Milestones Wednesday, Oct. 9.
“I really can’t believe I’ve been coming here (to Rotary meetings) for 50 years,” Dr. Jack Faber told fellow Rotary Club of Farragut members after being acknowledged for decades of perfect attendance.

“I really miss Rotary when I’m not here,” he added. At meetings, members find him “sitting at the back table with his friends,” his favorite activity in the club.

Faber laughed but then added, “They’re all great guys. A gal occasionally sits there, like Bettye Sisco.

“I know believers (in Christ) in Rotary and they’ve been so nice to me, so kind and uplifting,” he added at a subsequent interview. “It’s a wonderful place to meet great people.”

“I think (his being in the club for 50 years) is absolutely awesome,” said Jeanne, his wife of 43 years. “I don’t know anyone who can be that dedicated and devoted to Rotary.

“He used to be much more active, but because of his (multiple sclerosis) he can’t,” she added.

Faber and Jeanne moved to Hardin Valley eight years ago, but the Rochester, Minnesota, native has been attending Rotary meetings all over the world for much of his life.

They have three children, Jill, John and David; and five grandchildren, Christian, Matthew and Lauren Faber in Holland, Michigan, and Mia and Cole Faber of Knoxville. They attend West Park Baptist Church off Middlebrook Pike.

“My father was a doctor at the Mayo Clinic,” he said. “I decided, when I was in the fourth grade I wanted to be a doctor.”

Faber then got his medical license in 1964. While in college, he found the MS actually decided his medical field.

“I’ve had MS since I was 22,” he said. “That changed my life, I think. I went to the Mayo Clinic and they diagnosed me.”

“It made him change his medical field,” Jeanne said. “He had to go into a field where he wasn’t up at night, so he could get a good night sleep and still take an hour nap every day.”

So instead of going into radiology or anesthesiology, Faber went into dermatology.

Along with the work schedule, “I wanted patient contact,” he recalled.

“I left the Mayo Clinic in 1960 and went into private practice in dermatology,” Faber said. He hired Jeanne as surgical assistant and office manager in 1968, and they married in 1976.

Laughing, he added, “She has been running all my errands since then.”

Faber first became a Rotarian in 1969 while living in Neenah, Wisconsin.

“I think it all started because I became a believer (in Christ). I was in practice then,” he said.

Upon reflection, Faber thinks what changed his life was “becoming a believer” that year.

“I remember going around the state of Wisconsin and talking about Jesus Christ through Christian Businessmen (organization) and Christian Couples Club,” he added. “It didn’t take long for me to give my life to Christ.

With eyes glistening, he recalled “Finally, my father, who was an ob/gyn at the Mayo Clinic, came to know Christ before he died. How do I know that – because he prayed with me about six months before he died.”

One aspect that drew Faber to Rotary is its Christian support of the community and “the whole world, really.”

When the Fabers moved to Hardin Valley, he remembered looking through the Yellow Pages and finding The Rotary Club of Farragut — and has been a member since. “I become more and more impressed by them,” he said.