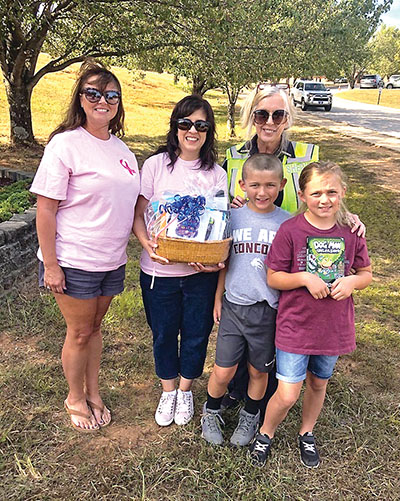 Long-time Farragut crossing guard Ann Page — behind two of her grandchildren, Lochlan and Lucy Page — was honored by the community recently following a negative comment shouted her way during traffic duty. Presenting her with a gift basket Friday, Oct. 4, were Farragut Primary School Parent Teacher Association president Michelle Morrow, left, and Farragut Middle School PTA president Mary Cook.
For 34 years, Farragut native Ann Page has been as constant as the morning and afternoon traffic she directs at both Farragut Primary and Farragut Middle schools, all the while ignoring the weather — and sometimes even her health.

The crossing guard, who works at both sites through the Knox County Sheriff’s Office, said she has frequently ignored doctor’s orders down through the years, even as she battled breast cancer and recuperated from surgeries.

“I always tried to make sure I could be at the school, whenever I could,” Page said. “A lot of times, if I couldn’t be there the Sheriff’s Office didn’t have anyone else to send, and I never wanted to let anyone down.”

However, Page felt she had failed in some way when a passing motorist, upset about traffic delays Friday, Sept. 27, rolled down his window and shouted “Worthless” as he drove past.

“It really hurt my feelings,” Page said. “I couldn’t figure out what I had done or what I could do, for him to not see me that way. At first I thought someone was teasing with me, but when I saw him I realized I didn’t know him.

“The traffic frustrates me just as much as it does the drivers, and I do my best to help, but it’s hard to get the traffic to move better on Campbell Station sometimes,” she added. “I really do my best to be as fair as I can be, on how I direct the traffic.”

Page went home, and told her daughter, Caroline Page, what had happened.

“She got really mad,” Page said. “I don’t do Facebook, but she posted about it on Facebook.”

Caroline’s post read, in part, “This is the hardest working woman I know. For someone to be so cold and callous to yell ‘Worthless’ to my 64-year-old mother who has been out there for the past 34 years directing traffic, rain or shine, doing her absolute best to keep the mass chaos of morning traffic as orderly as possible, is just plain unacceptable.

“She was out there the day after having a portion of her breast removed after being diagnosed with breast cancer, with a drain still in place, for goodness sake. She is such a people pleaser and really takes these crude insults to heart.

“If you all experience and appreciate what this beautiful soul does for our community, or if she has touched your life personally in one way or another, I’d LOVE for you to give her a shout out so that I can brighten her day a bit!”

What happened next was a virtual avalanche of positive comments and gestures, all of which served to show Page just how worthy she was — and is.

More than 500 comments were made on Caroline’s post alone, from parents, teachers, former students (Page also is a well-known long-time piano teacher) and members of the community who passionately responded.

“This woman is awesome!” responded Bonnie Smith. “I taught at FPS for over 24 years. She was ALWAYS there! My opinion, the man in the car is worthless! Love you Ann!”

Sara Davis commented, “She is an amazing woman!”

“We love Mrs. Page!” posted Pamela Truman Ward. “She is a musically gifted pianist … [and] gives lessons to homeschoolers in between her times at FPS.”

“People responded, and were so kind, and positive. I read every comment,” she said. “It was people I know, people I didn’t know, former and current piano students.

“I just cried, and read them all to my husband [David],” she added. “It has been amazing.”

Supporters also responded in other ways.

“By that afternoon, people were already handing me flowers and were hugging me,” Page said.

Members of the community overwhelmingly responded, donating numerous gift cards, candy and many handwritten cards of appreciation, and the basket was delivered to Page on Friday, Oct. 4, at FMS, just as her traffic directing duties were winding down for the last day before Fall Break.

“We just wanted to thank her for everything she does,” FMS PTO president Mary Cook said. “She is out here every day, doing the best she can, and we appreciate her so much.”

“I am just overwhelmed that they would do all this for me,” said Page, who also has two other children, Maryann Page Azambuja and Chris Page, and nine grandchildren, and has lived on her family’s Farragut property for most of her life.

“I am grateful for everything everyone has done for me and am floored at their thoughtfulness,” she added.

“I want people to know how appreciative I am and how this has been the biggest honor I have ever had.”