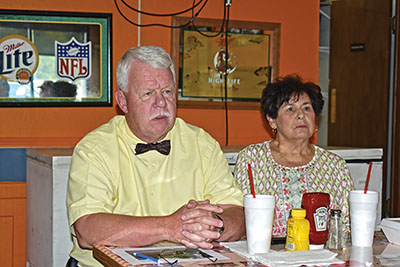 Williams said a little more than a dozen came out, including he and his wife, T.C., Alderman Ron Pinchok and Steve Krempasky, Shop Farragut/Farragut Business Alliance executive director — and said he was encouraged by the feedback.

“We had a lady from Kingsgate with an issue, and I’m going to see what I can do for her,” Williams said. “I also talked to a couple who are real estate agents, and another couple who had some questions about traffic congestion,” along with two other couples later in the evening.

“I thought there would be more people, but it was only the first one,” he added. “I want to give people the opportunity to talk where they are not in a Town meeting or might be concerned about being on TV.”

(Farragut broadcasts live its Board of Mayor and Aldermen meetings the second and fourth Thursdays, and Farragut Municipal Planning Commission meetings the third Thursday of each month on Charter Channel 193 and on TDS Channel 3).

Williams, who also is responsive to constituent phone calls and e-mails, said he had the idea for the Mayor’s Night Out based on a couple of factors.

He said he formerly served as a manufacturing community liaison in Huntington Beach, California, and that city’s then-mayor held Mayor’s Night Out events.

“Those were a good idea,” he said. “They were very successful.”

Also, Williams said he wanted to host them in response to recent social media posts and users, which have been very prolific in past weeks, primarily regarding prospective growth within the Town.

“There are lot of people who make comments on social media, and sometimes they are just totally wrong, or they can start with one comment then morph into something totally different,” Williams noted. “Sometimes all that needs to happen is to be able to share some facts, and it really reduces the misinformation.

“I just want people to know I am here and available if they want to talk to me.”

He said next month’s Mayor’s Night Out meeting will be on an “as yet to be determined Tuesday” at Water into Wine bistro and lounge, but will be announced soon.