Local musicians, long-time friends are not just another garage band 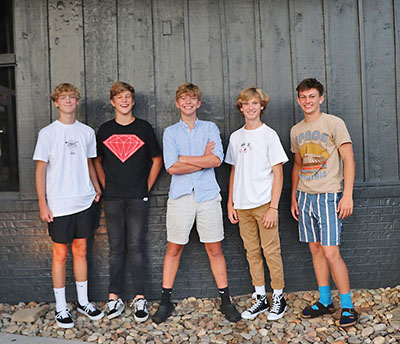 Hardin Valley Academy students Jacob Greene on keyboards, along with brothers, Maddox and Jackson Frazier, on the bass and lead guitars respectively,

perform in the group, along with Oak Ridge High School students Grayson Strader on drums and the group’s lead singer, Marty Gee.

The teens all have long musical histories, and have taken music lessons, together and independently, down through the years. They also knew each other through their parents’ friendships, too.

Gee, who also plays guitar, already was performing with a different band that won a competition earlier this year. But at the last minute, its members were unable to play a scheduled gig.

He turned to his friends, who quickly and affirmatively responded, and even came up with the name, on the fly.

“Our first concert was on the Summer Solstice (June 21), so that’s where we came up with the name,” said Jackson. “We only had like two days to rehearse, but it all worked out really well.”

“I was really surprised and impressed at how naturally we all came together,” added Gee.

From that day on, the quintet found its sweet spot, and has become very popular, through social media presence and word of mouth, with an increasing repertoire that includes a large mix of cover tunes, from classic artists such as Johnny Cash and Jimi Hendrix, to more contemporary performers, such as Blues Travelers and John Mayer.

“I really like that our band plays all types of music and that we are versatile,” said Maddox, now 14, who said he started playing classical guitar at 9, acoustic at 10 and electric at 11.  “... I also think it’s cool that we incorporate keys into our music .... not everyone does. I’m also surprised that we have over 800 followers in just 2.5 months.  Crazy.”

“The band is really fun and is great for getting better at playing music I love,” said Greene, 15, who started playing the keyboard in seventh grade. “As a band we are just doing this for fun and are not just doing this for fame or anything — we are just kids who enjoy jamming and making people enjoy our music. We hope to make music in the near future. I can’t wait to see how our music develops and gets better as we mature and continue playing together.”

The band typically practices at the Fraziers’ Hardin Valley home two or three times a week, and has been performing at least once a week in local venues since that first fated concert, including a few back-to-school parties, at the Heart of Summer Triathalon at Davis YMCA and last Saturday, Oct. 19, at the Maple Street Biscuit Company.

Jackson, 15, has played guitar for about three years, and also plays drums. He and Maddox also attend Fellowship Church, where Jackson plays guitar in the high school services and leads pre-teen worship. which Maddox soon will be joining.