Clamping down hard on Dawgs 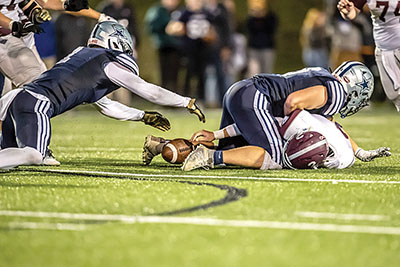 After Eli Purcell’s hit on Bearden quarterback Collin Ironside forcing a fumble, Farragut teammate Alec Keathley recovers to kill a Bulldogs drive inside the FHS 30 with less than three minutes to play, as the Admirals hung on for a 14-7 Region 1-6A home win at Bill Clabo Field on “Rivalry Thursday” Oct. 17.
Farragut High School football head coach Eddie Courtney knew his team had to win against Bearden, as the game had higher stakes that just West Knox County bragging rights.

“This was an important game and we won it,” Courtney said after the Admirals outlasted the Bulldogs 14-7 Thursday night, Oct. 17, in a key Region 1-6A tilt at FHS’s Bill Clabo Field.

Early on last Thursday night, it was apparent this was going to be a typical Bearden-Farragut tussle — and it also was evident defense was going to be the order of the day. But the Admirals (4-4 overall, 3-1 in region) scored on the game’s opening possession.

The touchdown was set up by Gabe Hensley’s 52-yard reception. He sparked a wounded backfield which remains without juniors Matt White and Sam Kniss, who are both nursing injuries.

And necessity was the mother of invention for the Admirals, who used tight end Alec Keathley and tight end Eli Purcell in the backfield. “I really have to commend the offensive staff for coming up with this plan,” Courtney said. “They thought outside the box and we did some things out of the wildcat (formation) with Alec, and we used Eli Purcell as a running back.

“Neither one of them had ever played running back for us, but they’re great football players.”

Both Keathley and Purcell made big plays on both sides of the ball against BHS (2-5, 2-2).

Keathley would make a key reception on a two-point conversion after the Ads’ go-ahead score, and Purcell had a huge sack to force a Bearden fumble that was recovered by Keathley when Bearden was driving late in the game.

The Bulldogs actually pulled ahead 7-6 when quarterback Collin Ironside threw a 31-yard touchdown pass to Hayden Candela on fourth down. Bearden kicker Connor Cross added the go-ahead PAT to make it 7-6 with 3:21 left in the third quarter.

Hensley broke the tie when he scored from 28 yards out on the final play of the third quarter. “It was third-and-1, they called ‘Denver,’ and I knew I was getting the rock,” he said. “... “I saw the hole and I took off just like that.”

“Our defense played well,” Ironside said. “And we turned them over twice, but we just couldn’t make the big plays when we needed to.”

“Our defense played the best that they have all year,” BHS head coach Morgan Shinlever said. “We got a couple of fumbles and we had a chance to win it late, and that’s all you can ask for.”