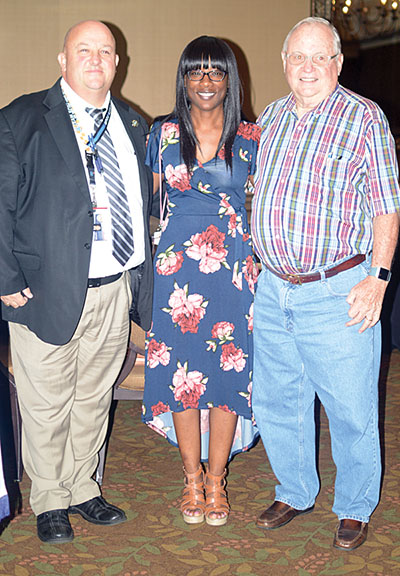 The state is observing Tennessee Domestic Violence Month throughout October. Faulkner said Tennessee is in the top five in the nation in the number of homicides connected to domestic violence.

“I want you to understand what domestic violence is,” said Faulkner, who shared his insights about domestic violence occurring in Knox County with The Rotary Club of Farragut during a recent Wednesday meeting in Fox Den Country Club.

He reviewed the laws and charges related to domestic abuse, identified those who are victims and orders of protection.

With Faulkner was Khadijah Roller, victim advocate with KCSO who works with the unit, which is made up of nine detectives, three victim advocates and a case manager. It covers domestic violence, child abuse and elder abuse.

“I want to warn you,” Rotarian Bill Nichols said just prior to the playing of a recorded 911 call. “The first few minutes of this may be disturbing for you … It’s real life.” He referred to a child sobbing as she reported her parents’ fighting, as she screamed for them to “stop!”

“This is what’s occurring in Knox County today,” Nichols added.

“People ask how children are affected by domestic abuse?” Faulkner said. “This is the trauma that’s inflicted.

“Kids are raised in this environment,” he said. “That’s all they know, oftentimes.

“The experts say less than half of domestic abuses are even reported,” Faulkner added. “It’s an epidemic across our country, across our society.”

He said domestic violence crosses all social-economic and racial thresholds.

“We’ve looked at the numbers reported,” Faulkner said. “There is a (Knoxville) police or (KCSO) officer in our community who responds to a domestic disturbance call about every 30 minutes.

“That’s around the clock, 24/7, 365 days a year,” he added. “Oftentimes on an evening shift, on patrol, officers are answering one call, as soon as they get from it, they go on to the next one.

“A lot of people don’t even know what the law is on domestic violence,” Faulkner said. “How many know that harming an animal is domestic abuse? It’s in the law.”

Destruction of property also ties in, “and, of course, we have assault, or threat of assault,” Faulker said.

“(Domestic violence) is not an easy thing to deal with,” he continued. However, “back in the 1980s, the laws started to change because we had to do something to stop the homicide rate.”

Faulkner has been with sheriff’s office for 26 years and with the Family Crimes Unit for almost 11 years.

“It’s not a happy thing I talk about because I talk about real world stuff that goes on in our society every day that’s not blasted in the news,” he said.