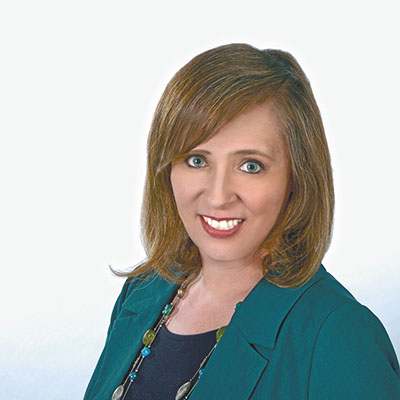 Julie Blaylock
In terms of giving credit where credit’s due, Town of Farragut stands tall in the history of what is now known as Farragut West Knox Chamber of Commerce.

“The Farragut Chamber was started officially in May of 1987 — and there’s a lot of people over the years, that I’ve heard, that would like to take credit for starting us,” said Julie Blaylock, FWKCC president/CEO since January 2017.

“… Largely, the Town of Farragut and the late Mayor Bob Leonard had the most, to my understanding, integral part in starting our Chamber,” she added. “… The Town Board of Mayor and Aldermen were the first ones that really decided that the businesses here needed their own chamber.”

Laid off from her job “doing office management for a local architectural firm” in Knoxville in 2011, after being there about seven years, Julie Blaylock was hired by then Farragut West Knox Chamber of Commerce president/CEO Bettye Sisco as executive assistant later that year. Replacing the retiring Sisco as president/CEO in January 2017, Blaylock said, “New things happen every day.” Blaylock first came to the Knoxville area in 2001 from New York, “living in Queens,” to finish her Bachelor of Arts degree in English at the University of Tennessee. While pursuing her graduate degree, “My mom had a medical emergency, she was still up in New York living in Queens, and I was an only child, so I had to make a decision on how to best help her,” Blaylock said. “How to best help her was to pick her up and move her to Knoxville. “Originally my plan was I was going to teach English, I was going to teach in college; I was going to get a Ph.D. That didn’t get to happen for a lot of different reasons,” she added. Among just a three-person full-time staff at the Chamber’s office, 11826 Kingston Pike Suite 110 in Farragut Crossroads, are executive assistant Suzanne Krygier and front office manager Susan Roberts. This weeks Foundations: 40 Years of Farragut podcast is presented by Concord Christian School

About working with Town of Farragut in 2019, which is led on the non-political side by Town administrator David Smoak, “We have a very good working relationship with David, and also with his assistant, Trevor Hobbs,” Blaylock said.

Blaylock said she regularly hears from businesses outside the area about the suitability of possibly moving to the Farragut area.

“’What is it like to do business (there), to open a business?’” she said about questions she fields.

“… When we get those inquiries, I usually loop in David or Trevor immediately,” she added.

“The Chamber, for the first couple of years, was run by the board,” Blaylock said. “With the first Chamber Board, the chairman also was president of the organization.

“The original chair was Mike Rothman — he and his wife, Kay, owned Checker’s pizza.”

Originally known simply as Farragut Chamber of Commerce with 139 charter members in 1987, “By 1997 we were up to about 400 members, but only about a third of those were in Farragut,” Blaylock said about the Chamber’s rapid expansion, especially beyond Town limits.

As a result, it became known as Farragut West Knox Chamber of Commerce “in the very late 1990s,” she said.

“The Chamber now has approximately 650 business members,” Blaylock added. “Roughly a third of those are still in Farragut,” with another 56 percent located within Knox County.

“We also have Anderson, Blount, Loudon and Sevier counties.”

As for average member business size, “About 66 percent of our businesses have 15 employees or less, and about 42 percent have less than five full-time staff,” Blaylock said.

In 1991, Patty Beaty “was the first Chamber Board president,” Blaylock said.

In reading stories about Beaty’s new job, “The onus on her to do a good job, in the wake of her male predecessors, was a big deal — even then,” she added.

“She clearly did it well because, as we came along, we have continued to have female board presidents.”

Current board chair is Beth Ann Carter from MBI Companies, who has held that position since 2017. “She’s done a great job,” Blaylock said.

“The head staff person was executive director,” the first of which was Betsy Morrow.

“I believed she was hired in the early ’90s,” Blaylock said. “She served roughly for 10 years.”

Having first come to East Tennessee in 2001 from Queens, New York, to attend the University of Tennessee, Blaylock was hired by then president/CEO Bettye Sisco as FWKCC executive assistant in 2011.

Sisco, who came from Idaho to Knox County and took over as the first FWKCC president/CEO in 2001, “was my mentor,” Blaylock said. “… Bettye was a friend of someone who was, at that time, the current board chairman, which was Marianne Morse. They had worked in sales together through Mary Kay (Cosmetics).”

Just before Sisco took charge, “There was a lot of transition going on, and not all of it was positive,” Blaylock said. “The Chamber at that time was beginning to struggle. I’m not really clear about all the different reasons why, but our membership was lowering.”

When “a treasurer at the time” showed Sisco the gloomy financial books upon her taking the job, he said, “‘We’re not sure if we’re going to be able to keep you on for more than a couple of months,’” Blaylock recalled hearing.

“She went right to work, and she took all of her sales knowledge and her personality and everything that makes her who she is and she started going up the streets knocking on people’s doors,” she added about Sisco.

“Over the course of a couple of years we started to make a comeback. We paid off our debts — we are totally debt-free to this day.

“She worked so hard to get that blight off of us.”

During the year before Sisco’s arrival, “I think they had seven for the whole year,” Blaylock said.

When Sisco took over, this Chamber “was down to about 135 members,” Blaylock said.

“Bettye was, and is, the master at building relationships, making people feel good about themselves,” Blaylock said.

“I wouldn’t be who I am, or what I am, now without her,” she added. “She has been completely transformative for me as a person.”