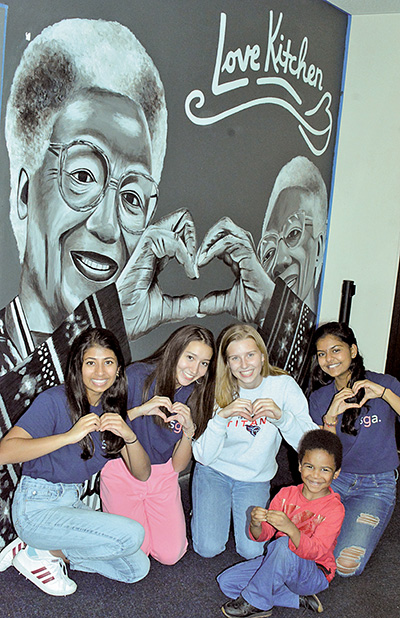 Farragut High School SGA officers pose with Kenny Smith III, 4, in front of a mural honoring The Love Kitchen founders, the late twins Helen and Ellen Turner, at TLK in East Knoxville after delivering several thousand cans of food Friday afternoon, Oct. 25. From left are junior Yasha Doddabele (secretary); sophomore Hannah Brennen (treasurer), junior Audrey Richards (president) and senior Nandini Rana (vice president).
The ceiling of giving at Farragut High School has yet to be reached — once again thanks to its Student Government Association — when it comes to helping feed those in need at The Love Kitchen in East Knoxville.

This FHS mid-to-late October ritual of collecting and giving TLK the equivalent of more than 20,000 cans of food — all accomplished in slightly more than one week — set yet another school record for food and money raised through the coordination and leadership of SGA’s 85 students.

“About 24,000 — but I think we got a little more than that,” Audrey Richards, SGA president, said about the record number. (The term “cans” also includes ramen noodle boxes plus money donations, with every $1 donated counting as two cans).

“We’re just really happy and thankful that, again, Farragut High School has come together and exceeded expectations, which they do every year,” said Patrick Riggins, TLK executive director who has been involved with the Kitchen — having worked closely with the late founders Helen and Ellen Turner — for about 20 years.

A convoy of SUVs and other vehicles, totaling about 45 SGA members, arrived at TLK Friday afternoon, Oct. 25.

“This is one of the big re-supply can drives that we have that really helps carry us through the holiday season and well into next year,” Riggins said.

Such contributions help provide between 2,700 and 3,000 meals a week to about 250 who visit TLK to enjoy hot meals beginning at 1:30 p.m. each Wednesday and Thursday, and also includes a week’s worth of hot-meal deliveries each Thursday to a little less than 500 East Knoxville homebound.

During Admirals varsity football home games versus Maryville and rival Bearden, “we collected about $800,” Richards said.

To encourage FHS students to contribute, “We actually made a video (at TLK) to show them how important it is,” she added about a “news crew video” shown Friday, Oct. 18.

As a result, “Some classes, with 30 kids, raised as much as 3,000 (cans and money equivalent) by themselves,” Richards said.

Riggins said TLK is planning to paint the building exterior and fix chipped and worn block. To donate toward this effort, go to www.thelovekitchen.org/.

Nandini Rana, SGA vice president and an FHS senior, said it’s “just been really exciting seeing the progression that we’ve had. It’s increased by almost 5,000 (cans) from my freshman year.”