Hawks slam door on Ads’ offense, use ground attack in rain for 33-6 shocker 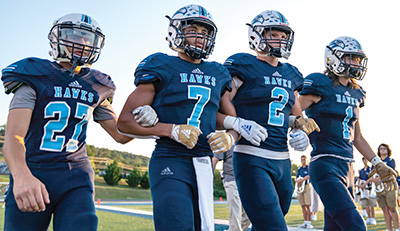 York, a senior wide receiver and linebacker for the Hardin Valley Academy football team, recovered two fumbles, including one he returned for a touchdown, to help the Hawks capture a 33-6 Region 1-6A victory over rival Farragut on a rainy Senior Night Friday, Oct. 25, at HVA.

It was the second consecutive victory for Hardin Valley and nearly a second straight shutout as the Admirals (4-5 overall, 3-2 in the region) scored on Eli Purcell’s five-yard run with 1.2 seconds remaining in the game.

Hardin Valley, which snapped a six-game losing streak with a 14-0 victory at Jefferson County Friday, Oct. 18, has had its struggles on the gridiron in 2019. But the Hawks are now back in the playoff hunt, and York said the victory was huge.

“ We’ve gone through a lot of adversity and it’s like (Hardin Valley) coach (Mike) Potter said, ‘you can give up and roll over or you can fight like (expletive),’” said York, who made four tackles (including two for loss) in the game in addition to his two fumble recoveries. “We’ve chosen to come in here and fight.

“And I can’t think of a better way to celebrate my birthday than winning a football game with these guys and winning a game against Farragut.”

HVA (3-6, 2-3) must win at Morristown West and get help to clinch a playoff berth. Farragut must now win Friday at home against Jefferson County in order to ensure an opening-round playoff game Friday, Nov. 8.

FHS head coach Eddie Courtney was left baffled by his squad’s performance against the Hawks, although Hardin Valley has become a house of horrors for the Ads — Farragut is 0-3 at HVA all-time.

“They came out with their backs against the wall and they played really well. They’re a team that’s trying to get into the playoffs and I’m sure that was a lot of motivation,” he added.

“We didn’t execute very well and we didn’t coach very well and that’s what happens when you’re not ready to play. I thought we were ready, but we weren’t.”

After the two rivals slugged through a scoreless first quarter on this cold and rainy night, the Hawks took a 6-0 lead early in the second frame when Kelton Gunn scored on a short run.

He would add another touchdown run later in the frame to give the Hawks the 12-0 advantage that they enjoyed at halftime.

“We’ve had it where things aren’t really going our way this year, but we came in here and got a 33-6 win over a good team, one of the best teams in our region,” said Gunn, who rushed for 145 yards and two touchdowns.”

Ryan Nichol and Luke Filipkowski added rushing touchdowns for the Hawks after halftime.

Filipkowski was a force on both sides of the ball as he rushed for 85 yards.

On defense, the senior running back and linebacker had six tackles, including one for a loss, and a sack.

“Our kids kept fighting and that’s the key for us,” Potter said.

“If they continue to fight, then we still got a chance.”