Moving up to Division II-AA, Catholic reaches finals before loss to Briarcrest in four games 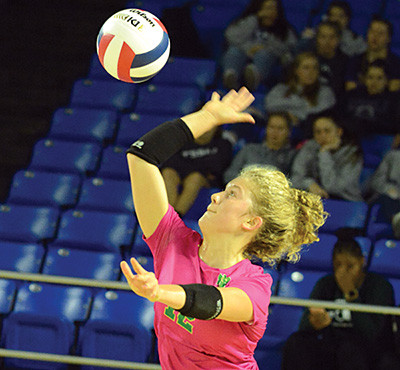 This year, KCHS (27-8) made its first trip to the state tournament as a Division II-AA team, with the Lady Irish program having made five previous trips in Division 1-AA. Catholic was a runner-up four times and won the state title in 2016.

The Lady Irish fell behind the defending state champion Lady Saints early. Briarcrest (39-4) built a 16-6 lead in the opening set and Catholic, despite pulling to within 21-17 on a big service run by Sasha Cain, never really recovered.

Junior libero and team captain Cassie Kuerschen, who has played on three consecutive runner-up teams, served up eight consecutive points to make the score 14-5. She had an ace to make it 12-5 and senior Carlee Hart had two clutch kills. From there, the Lady Irish never looked back.

Catholic led 9-5 in the third set before the Lady Saints battled back. The set went down to the wire, and Catholic looked to be poised to win when two consecutive aces by Kuerschen gave KCHS a 23-22 lead.

But the Lady Saints scored three straight points and pulled ahead in the match 2-1.

Catholic opened a 5-4 lead in the fourth set before the much bigger Briarcrest squad stormed back to open a 17-10 advantage.

Catholic would rally to tie the game 21-21 before Briarcrest secured its second straight title.

“I don’t think some people had their best games, but I thought we played a good match,” said Kuerschen, who had 31 digs and four aces. “(Briarcrest) definitely had the size. They have the size that you just don’t see in Knoxville.”