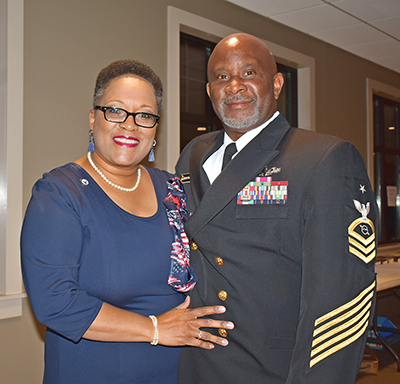 “I love veterans. I think all churches should do this,” Marsh said. “I believe it is Biblical and honorable to honor them, and kids need to be reminded as much as the adults do, who our veterans are and what being a veteran means.”

The South-Doyle Junior Reserve Officer Training Corps Color Guard “Presented the Colors” and demonstrated the 13 folds of the American flag for the audience.

Guest speaker was Capt. Dennis Worley, U.S. Navy, retired, who currently is in full-time ministry in Morgan County, where he lives with his wife, Ann Worley.

“I absolutely adore this young man,” said Marsh in introducing Worley, who is well-known in the Farragut community: Naval Science instructor for Farragut High School’s NJROTC from 1996 to 2004, he also coached the girls cross country team (1996 TSSAA state champs) and NJROTC air rifle. “Sometimes God brings people into your life with such force, it changes how you think, act and talk.”

“That is what this [Worley] did for me … and I know you will be blessed by him.”

Worley, who served in the Sports Ministry with His Passion Ministries from 2005 to 2009 after he left teaching, also worked with the Fellowship of Christian Athletes International from 2010 to 2012.

His military career began with a qualified alternative appointment to the U.S. Naval Academy in 1968, from where he graduated in 1972 before being commissioned as an ensign with surface warfare as his designated service selection. He served in Vietnam from 1972 to 1975, then spent an additional 21 years in the service, which included deployments in the Mediterranean and Guam, and served in Desert Shield and Desert Storm before retiring in 1996.

Worley discussed the topic of “service” when addressing the veterans.

“There are four choices on this earth of who, or what, you will serve,” he said. “Satan, the world itself, self or God. And you have to decide who you are going to serve.”

He discussed the Biblical marking of bond slaves and bond servants, which set them apart and made them known to others.

“Are you so marked that people can look at you and see who you serve?” Worley asked. “God loves you, those of you who are the elect, who are saved.

“What are you going to do with that?” he concluded. “You have to make that decision every moment — that’s where the challenge is.”

The program concluded with Marsh handing out “Challenge Coins” while saying, “Find what you need to be doing and serve God.”