Get ready, get set: Network 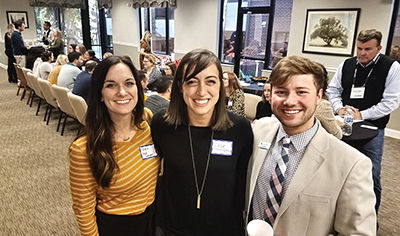 While FUEL’s focus is on “our talented young professionals, entrepreneurs and emerging leaders,” as Chamber president/CEO Julie Blaylock explained, the event — described in promotions as “a structured way for anyone NOT comfortable walking into a room/event full of strangers with an opportunity to make high-quality connections in a short amount of time” — was open to all Chamber members.

Dozens attended the event, where chairs were set on either side of a long table in the middle of the room. On one side potential networkers sat in place, while on the other side individuals would sit down for about five minutes and chat over a provided set of questions, until a buzzer sounded, and the second group would slide one space over to start the procedure again.

“I really enjoyed it,” said Trevor Hobbs, Farragut assistant to the Town administrator. “I had never been to a speed networking event like this. Whereas at most traditional networking events, I might have a small handful of conversations while working around the room, the structured set-up of the speed networking offered me the opportunity to get to know about triple as many people.

“And the simple prompt of two questions were really helpful,” he added. “Too often we think of people as their job, as if they are one and the same. But in reality, people are cool, and they are so much more than their job or their title. And this speed networking allowed me to get to know the person behind the job, behind the title. And that’s the person that I really want to meet anyway.

“I’ve had some great conversations at networking events before, don’t get me wrong. It just takes a lot longer to get to know people, and so I tend to meet a relatively small number of people at each event.”

Pool said the turnout “was awesome. We couldn’t have had any more people attend, the room was so full.”