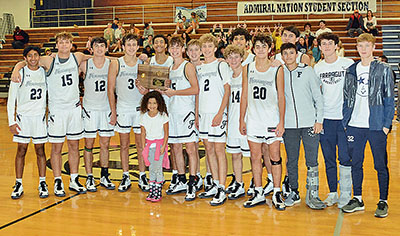 “We really picked up our intensity defensively,” Farragut head coach Jon Higgins said. “And we finally started getting those loose balls. ... From about mid-second quarter on, I thought we really took advantage of those. Grabbed the loose balls.”

“This team has a lot of fight,” Geron said about the rally.

Individually, “I told (the team), ‘we wouldn’t be 6-0 without Robby,’” Higgins said. “... I thought Kaleb played fantastic today — but he has all season. ... Jack Carasso gave us some great minutes.”

VanAcker said about the turning point, “We started pushing each other more, got the intensity up.”