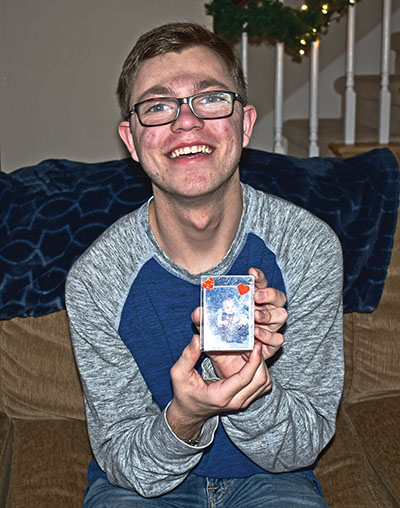 Heart transplant recipient Graham Baakko holds a picture of Austin, the 5-month old whose death 16 years ago gave Graham the gift of life.
As a basketball-playing honors student, Graham Baakko seems like any other 16-year-old — but this Farragut High School junior actually is a living miracle several times over thanks to a selfless donation when he was just 41 days old.

Graham was born March 8, 2003, in Michigan to Angela and Tim Baakko, and was critically ill from the beginning. He suffered from a heart defect, which had been undetected in his utero.

“The ultrasound showed everything was normal, but as they later explained they had been unable to detect the issue on the left side of his heart,” Angela said. “Then when he was born, he turned purple and they put him on a ventilator before airlifting him to the University of Michigan, Mott Children’s Hospital,” which was about an hour away.

“They told us we had three options,” Angela said. “A transplant; the Ross Procedure (which would replace Graham’s aorta with his own pulmonary valve, offering only a 25 percent success rate) or putting him on comfort care.”

While a transplant would give Graham the best chance of survival, the situation was devastating to his parents. “I hated it,” Angela said. “I didn’t want to pray for some child to die, but I did pray for our child to live.”

She finally reached the decision “to pray that if something happened to another child and that child could not live, that the parents would choose to donate the organs.”

That prayer was answered when Austin, a 5-month-old boy from Minnesota, inexplicably stopped breathing at his daycare. After he was determined to be brain dead, his family donated several of his organs — including his heart to Graham.

“It was our Easter miracle,” Angela said. The surgery was performed on Good Friday, April 18, 2003.

It was not a minute too soon. Doctors later told his parents “they felt he couldn’t have lasted much longer,” Angela said.

While Graham’s new heart began working immediately, doctors did find a small hole in the new heart, which they repaired.

But doctors then discovered a separate problem — a coarctation in Graham’s aorta that had not been noticed before.

A follow-up surgery was required, and he was sent home on oxygen.

While his parents helped him overcome these issues, other problems occurred. “He never developed the suck/swallow capabilities, and ended up being on a (gastrostomy tube) for four years, and had both physical and occupational therapy for that until he was 4 or 5,” his mother said.

Tastes and textures were hard for Graham, whose first “real food” was ketchup. “Which now he hates,” his mother said with a laugh.

Graham also was diagnosed with craniosynostosis, which fused the pieces of his skull together prematurely and required surgery when he was 18 months old.

“They had to break my skull into 70 or so pieces, to make room for my brain to grow,” Graham said.

By the time Graham started school, most of his medical issues were behind him. The family moved from Michigan, finding a new transplant team in Charlotte, North Carolina, where twice a year he undergoes an EKG and an ultrasound. He is on cholesterol and anti-rejection medications, among others, and takes nine pills each morning and “two or three at night,” he mother said.

Despite being warned against playing contact sports, Graham has no medical limitations. “I feel like a normal kid,” he said.

Graham also is looking forward to participating in his first Transplant Games next year as a member of Team Michigan, in honor of where he received his transplant.

He is fundraising for the event, which will take place in New Jersey, where he will partcipate in basketball and possibly bowling and darts. “I felt it would be really neat to play with other people like me,” he said.

One fundraiser is through the Honey Baked Ham company, which is donating 20 percent of proceeds from online gift card sales through Friday, Dec. 20, to Team Michigan to help purchase uniforms.

Anyone wishing to purchase a gift card can visit the Team Michigan Facebook page and follow the link listed.

“If you already going to buy a ham, you could get the gift card, and use that — it doesn’t cost anything extra,” Angela said.

Following many years of written communication with the donor family, the Baakkos finally met them face-to-face about eight years ago during a summer vacation in Minnesota.

“We had started writing them little notes the year after the transplant,” Angela said. “How do you thank someone who saved your son like that? But we certainly tried.”

They also have one of Austin’s baby pictures, which they framed and keep prominently displayed.

“It went great,” Graham said about the visit. “Austin had a brother.”

“They are really nice people,” Angela said. “They were able to listen to his heart, the heart they had selflessly donated so my son could live.

“It is something you hope you never have to think about, but being faced with it I am so grateful for what they did.”