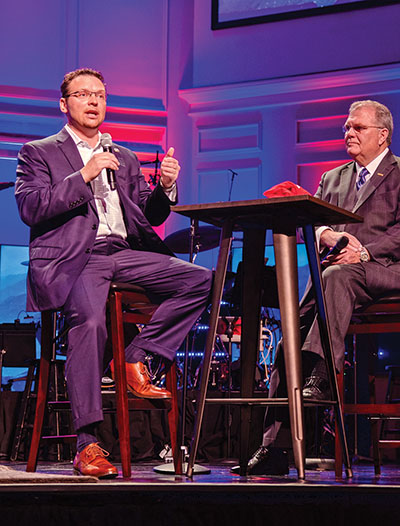 It was the first time in about 15 years the event took place at FBC, said Chris Turner, director of communications for Tennessee Baptist Missions Board, noting the Summit is rotated between the state’s east, middle and west divisions.

Turner said 997 “messengers” from Baptist churches across the state attended, as did 150 guests including spouses and laypersons.

The need for stepped-up pastoral care has been an issue, which came to light after the Rev. Randy Davis, executive director for TBMB who served as interim pastor at FBC for several months, met with pastors and staff across the state prior to the Summit.

Legal rights among churches also are under attack, with TBMB sharing a new partnership it has established with the non-profit Alliance Defending Freedom, which “advocates, trains and funds the issues of religious freedom, sanctity of life and marriage and family,” according to its website.

“There are so many issues dealing with religious liberty,” Turner said. “But many of the problems will likely be faced in our smaller churches.”

He said among more than 40,000 churches comprising the Southern Baptist Convention, a majority have less than 250 members.

Moreover, “61 percent of our Tennessee Baptist churches have pastors who are bi-vocational, meaning those churches often don’t have much in the way of resources to address legal issues that might arise,” Turner said.

With this new partnership, however, smaller churches will have access to legal counsel, with a cost structure that will depend on the church’s size.

“We are making it affordable, at a cost of just a few hundred dollars a year for that access,” Turner added.

Meanwhile, “Randy is really making sure we are addressing the spiritual and mental health needs among our pastors in very tangible ways,” he added.

The upcoming state Senate Bill 1236, described by literature as “the most comprehensive pro-life legislation ever proposed in Tennessee, would protect unborn babies from the point of conception.”

It was a key topic for state Rep. Jason Zachary (R-District 14, including Farragut), who attended the convention.

“The Bill will be taken up by the Senate in January,” Davis said. “We are asking you to reach out to you state senators and call them, let them know where you stand.

“The bottom line is that we work for you,” Zachary said. “If the people I work for call me, I listen.”

Under the leadership of the Rev. John Mark Harrison, FBC senior pastor, “the church was glad to host it,” Turner said about the convention. “It worked out great and we had a really strong turnout.”