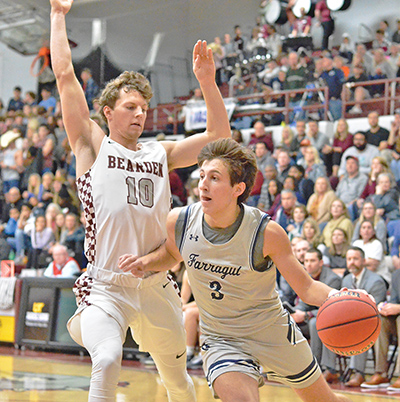 Robby Geron, Farragut senior guard (3) drives to the basket as Bearden defender Tyler Nordin, senior wing, tries to slow him down during this District 4-AAA rivalry showdown at BHS Friday night, Dec. 13. While Geron finished with 20 points in leading his Admirals offensviely, Nordin led all scorers with a 30-point performance as the Bulldogs rolled to a 57-41 victory.
KNOXVILLE — Early this season, Bearden High School senior forward Tyler Nordin could only watch helplessly as his teammates struggled through their growing pains while he nursed an injury. But since the Bulldogs have opened District 4-AAA play, Nordin has been nearly unstoppable.

He scored 30 points Friday night, Dec. 13, as Bearden nabbed a 57-41 victory over rival Farragut before a packed and spirited house at BHS.

Nordin has totaled 61 points in Bearden’s first two league games. He had 31 on Tuesday, Dec. 10 in a 64-62 overtime loss at home to Maryville.

“Tyler has been a difference maker for us and we have to find more ways to get him the ball,” Bearden coach Jeremy Parrott said after the loss against the Rebels early last week.”

Nordin continued his stellar play against the Admirals (7-4 overall, 1-2 in the district).

He scored 17 points after halftime of a game that was knotted at 24-24 at the break. Farragut actually led 24-20 before the Bulldogs (4-6, 1-1) scored the final four points of the second stanza.

After halftime, Bearden stepped up its defensive pressure and

“We played well in the first half and we came out and we had a lot of energy,” said guard Robby Geron, who was a one-man wrecking crew for the Ads, who have now lost two consecutive games after getting off to a 7-2 start. “We knew this was a rivalry game and we played pretty well in the first half.

Geron scored 20 points, including 16 over the first 16 minutes of the contest.

For Nordin, on the other hand, this was a game that could change the fortunes for the defending Class AAA State Champions.

“This year, it was tough early because we were losing games and nobody wants to lose games, especially coming off a state championship,” Nordin said. “Early, we had teammates getting frustrating and they were pointing fingers at each other. We have five new starters this year. And as a captain, I had to pull the team together.

Nordin was the only Bearden player to post double figures in the scoring column.

In the first half, Geron carried the Admirals as he scored 16 points before halftime.

Kaleb VanAcker scored six of his 11 points in the first half and Isaiah Smith scored all nine of his points after the intermission.

Farragut coach Jon Higgins was obviously frustrated after his squad’s second straight loss and noted that turnovers were a big reason for FHS’s demise on this night.