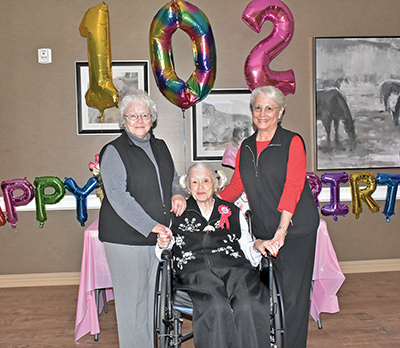 “This is so beautiful — so lovely,” said Ginny of the Dec. 11 commemoration.

“That everyone would put themselves out to give me such a nice party, it is so dear to me,” she added. “We had a family party Saturday and I didn’t expect anything else.”

Balloons dotted the room and spelled out “Happy Birthday” and her age. The party also featured cake, a bouquet of roses and gifts. “What’s in the bag?” Ginny asked mischievously, as her daughter replied, “You will just have to wait to find out.”

The lively resident had lived independently until February, when she moved to NHC to be closer to Seay, who described her mother as “a very special lady.”

“I’m special now because of all the parties,” Ginny said with a grin.

She was born Dec. 11, 1917, in the St. Louis, Missouri area where she was raised — and lived almost all of her life — even after marrying her late husband, Albert.

“She loved to cook,” Seay said.

“I did,” Ginny added. “My favorite things to cook were whatever tasted good.”

Seay said her mother was also an avid bridge player.

Ginny also enjoyed raising African violets, and was president of the African Violet Society at one time, putting her in charge of the group’s national convention.

“I loved it, and I loved my African violets,” Ginny said.

She was very active in her church, Concordia Lutheran, where she remains a member, her daughter said, although she now attends Grace Lutheran Church in West Knoxville.

In addition to her daughters, and a son-in-law, Tom Seay, Ginny has six grandchildren, 13 great-grandchildren and one great-great grandchild.

She said she is not sure if there is any “secret” to her longevity.

“I’m in good health,” she said. “It just happened that I have lived this long, but I do have a lot of nice friends who have been just wonderful to me.”

While the move was an adjustment at first, Ginny has come to enjoy her new surroundings. She excitedly mentioned that her son-in-law, Tom, had placed a birdfeeder prominently outside her window.

“I feel I have been very blessed.”