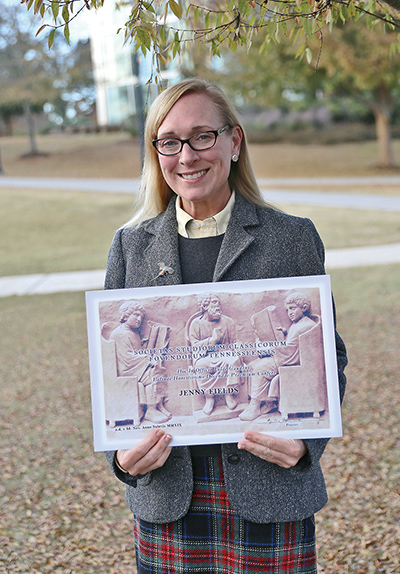 Each year, the Tennessee Classical Association recognizes a grade school Latin teacher for his/her effort and dedication with the purpose of fostering excellence in the teaching of Latin and to focus attention on those who have achieved it.

Daniel Solomon, senior lecturer of Classical and Mediterranean Studies at Vanderbilt University, commended Fields at the conference for her “appreciation for structure and a real talent for organization, which she applies through countless hours in perfecting every detail of a lesson plan, of a curriculum, of a schedule for a new project or Latin Club activity that can draw students in, ensuring that they will retain what they have learned because they will have enjoyed every minute of it.”

Fields teaches all Upper School levels of Latin at Webb – from Level II through Advanced Placement – and under her tutelage 67 percent of her students were recognized on the National Latin Exam in 2019.

Her students also have received numerous group and individual awards at the Tennessee Junior Classical League State Convention — and for the past four years have won Knoxville Latinfest.

State co-chair of the TJCL from 2011 through 2017 during a career of more than 22 years, Fields was instrumental in strengthening and expanding Latin programs as a former teacher at St. Mary’s Episcopal School in Memphis, Episcopal School of Knoxville and Knoxville Catholic High School.