Almost 40,000 deliveries made as Wareing, 79, bounces back from stroke with trademark ‘infectious smile’ 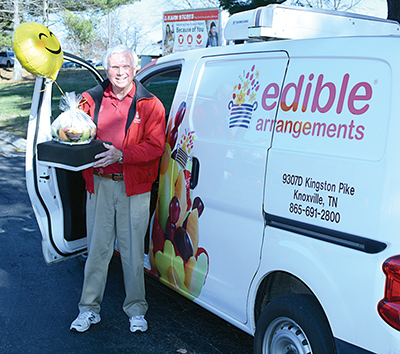 Charles Wareing, who will turn 80 in January, is building toward 40,000 trips taken as a delivery person with Edible Arrangements, 9307D Kingston Pike in Cedar Bluff, since 2007.
With almost 40,000 deliveries made in more than a dozen years of service at Edible Arrangements in Cedar Bluff, Charles Wareing’s “infectious smile,” friendliness and reliability have made him a hit with Knox-metro customers as he approaches age 80.

Suffering a stroke at age 78, Wareing obviously had to put his deliveries on hold — but for only two weeks.

“He bounced back and begged to come back,” said Bo Creech, Edible Arrangements District Sales manager.

On top of crediting fellow employees for reacting quickly when having his stroke — happening at the store “just after making a delivery” in the fall of 2018 — “I had a great doctor,” Wareing said.

However, despite excellent medical care, “even the doctor said, ‘You were a miracle,’” this special delivery man added about his speedy recovery.

Building back his energy quickly, “He

couldn’t stand being at home,” Creech added about Wareing.

Summing up the man

Edible Arrangements owner Bryan Butler summed it all up about Wareing: “he’s the absolute perfect professional — and outstanding employee and an even better person.

“He’s willing to do anything,” he added.

“Every day he brings his infectious smile

here,” Creech said. “His sincere and caring work ethic is off the charts. He’s a wonderful man and employee.”

The joys, attention to detail

“This is a great job because it brings a lot of joy to the recipients. They’re happy to get it,” Wareing said. “That absolutely brings joy to me.”

Especially evident with his repeat customers, “It’s nice to be greeted with a big smile,” he said. “And it’s great to be delivering a quality product.

“I’m pleased and flattered to be part of the company,” Wareing added.

Working about 30 hours, five days a week, Wareing’s range of deliveries go as far north as Oak Ridge, as far west as Lenoir City, as far south as Maryville/Alcoa and as far east as East Towne Mall. “We cover five counties,” he said.

About all those deliveries, “He’s got the paperwork to prove it,” Creech said about Wareing’s close attention to detail.

About being hired in 2007, “One of the young ladies who was working in the kitchen was also a member of the Kiwanis Club. I had just recently moved here at that point, and she said, ‘Would you be interested in a job?’” Wareing recalled.

The answer was enthusiastic.

“And I said, ‘sure. … I enjoyed meeting the public,’” he recalled saying.

“I was retired from retailing. … I was a store manager and later a mall manager in Central Florida just outside of Orlando.”

About moving to Knox County, having a sister and brother-in-law in this area, “It was nice to get out of Florida,” Wareing said.

“I love the winters here, and the topography. The foothills and the mountains are just gorgeous.”