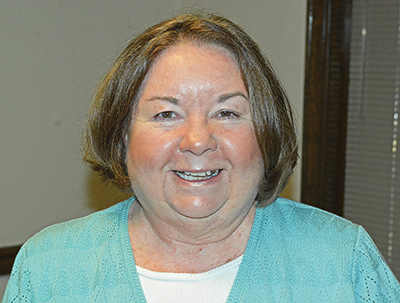 Rita Holladay
Between personnel working experience and personal reflection with family, Rita Holladay’s work with Town of Farragut would find an entry point.

Having moved to Farragut in December 1989 because “the schools were basically the reason we moved here in the first place,” Holladay, Farragut Municipal Planning Commissioner for about 17 years and chair of that nine-member body since 2010, would get her first taste of Town government experience in 1999.

“I started out by being on the Personnel Committee,” Holladay said.

“After I was here in Farragut, a friend of mine who knew I worked for the City of Knoxville said, ‘You ought to apply for the Personnel Committee for the Town of Farragut,’” she added.

Moving from South Carolina to Farragut in 1989, Rita Holladay, chair of Farragut Municipal Planning Commission since 2010 and a member for about 17 years, discovered a special colleague in the late Bob Hill. “Bob was a very favorite person of mine,” Holladay said about the FMPC chair for 25 years who stepped down in 2010. “I didn’t know Bob before I got on Planning Commission. “Bob got involved with the Town because he had an issue that he needed the Knox County Metropolitan Planning Commission to work on for him (concerning) his property out here in Farragut … I think it was back in the early ’70s,” she added. “He had to take off from his job in Oak Ridge to go to the meetings in the afternoon.” However, “He didn’t get called on,” Holladay recalled. “… So he had to take off another day to go back. “Bob was never one to just sit back and let things go,” she added. What is now called Knox County Commission, “He ran for County Court and was elected from the district out here,” Holladay said about Bob’s election “sometime in the early `70s. He was there for a while before he got involved with the Town of Farragut.” As a result, “Bob had a lot of history with planning commissions,” she said. “If something came up that happened 15 years ago or 10 years ago, he would remember why they did the things that they did.” As for helping Holladay, “He was a good resource even after getting off (Farragut Municipal) Planning Commission,” she said. “If I had a question, I would call and say, ‘Why was this, this way?’ With Mr. Hill a regular attendee of FMPC Thursday evening meetings after stepping down as chair, “A lot of Friday mornings we’d get a phone call from Bob with comments from the night before,” Holladay added. “The last time I saw him he was very much on top of knowing what was going on.” Ed St. Clair Holladay said FMPC member Ed St. Clair, who has served the Planning Commission since 1990, “Is a great source, also, of remembering why things were done the way they were done back 15, 20 years ago. (Read St. Clair’s Foundations story from our Dec. 12 issue).” This weeks Foundations: 40 Years of Farragut podcast is presented by .

“So I applied and was appointed to the Personnel Committee.”

Saying her professional background “is in personnel — I worked in personnel with the City of Knoxville a long, long time ago; back in the ’70s,” Holladay said.

“My husband and I moved, and I worked in personnel in a hospital,” she added. “After my kids were born I retired.”

“Eddy called me one day and he said, ‘I’ve got an opening in the Planning Commission and I’d like to appoint you to that.,’” Holladay added. “At that time the boys had just gotten through high school (Scott Holladay, FHS Class of 1997, and Brian Holladay, FHS Class of 1999) and I had been involved in all sorts of things with the school and what they were involved in. I was ready to quit all of that.

A little more reflection cleared up her decision.

“In the meantime the boys had been home from college, and we just happened to be talking about how much they loved growing up in Farragut and what a great place it was to live,” she said.

“… They both were into running and had run cross country and track in middle school and high school,” Holladay added. “… They talked about the trails and sidewalks here, and having the parks and all to run in.

“They also thought Farragut schools had done well to prepare them for college — for whatever they wanted to do in life.”

As a result, Holladay recalled saying to herself, “’Oh goodness, I’d like to see Farragut stay the sort of place Scott and Brian loved growing up in, being that kind of community.’

“That’s how I ended up on the Planning Commission.”

Sizing up her FMPC colleagues, “They had kind of varied backgrounds; several of them were engineers — and that was not my thing at all,” Holladay said.

In fact, “I thought that would be kind of a detriment to me because of technical stuff that these other people do,” she added. “But it wasn’t at all. … I thought it interesting that I could pick up on the technical things, the engineering-type of things and all that they do, a lot easier than I expected to.”

Instead, “The things I had more problems with at first were the people who came before us,” Holladay said. “Figuring out what their jobs were and the different aspects that they looked at in projects that they were doing.

“And every week almost it was a different group of people,” she added. “Keeping up with these people was a lot of (work), and I didn’t know these people at all.”

However, “After about a year all of that kind of fell into place,” Holladay said. “I then could remember who the people were and what their jobs were within a project.”

Currently, “We still have a couple of engineers on the Planning Commission, but it’s a varied background … that brings a good mix to the people that we have now,” she said.

About public perceptions of FMPC, “Sometimes I don’t know that people understand that we’re volunteers,” she said. “… And all of the committees of the Town are that way; thousands of hours people give to the Town every year.”

As for ethics concerning FMPC, “There’s no communication between us ahead of time,” she said.

“I think people sometimes have the perspective that we have an (preconceived) agenda, and we don’t,” she added. “We’re just there to hear what the applicant brings in. … We’re just there to listen to both sides before we make any kinds of decisions.”

Emphasizing the long-range nature of this concern, “I know back at the time when I was appointed, there was a lot of questioning on that sort of thing,” Holladay said. “But I have never, ever seen — from the staff or from anybody on the Planning Commission — somebody that has an agenda one way or the other.”

With FMPC meeting the third Thursday of each month in Town Hall boardroom, “We have to do our homework,” she said. “And that’s individually doing the homework from the material that’s given to us by the staff each month.

“They put together a booklet for us on each of the items that are going to come before the Planning Commission,” Holladay added. “… They give us good background as we’re going into the meetings. They put together a very thorough package for us.”

About learning her role as chair, “At first I was too busy thinking about operating the meeting,” Holladay said.

About the late Bob “Robin” Hill, longtime FMPC chair prior to Holladay, “Bob’s shoes were very big to step into in my opinion,” she said. “Bob had been chair for 25 years. …

“When Bob retired from it, Ralph McGill, who had just been elected mayor, said, ‘Are you interested?’” Holladay further recalled. “I said, ‘OK, I’ll give it a try and see.’”

“I’ve worked with three different mayors, and all of them have had a love affair with Farragut,” Holladay said about Ford, the late Dr. McGill and current Mayor Ron Williams. “Of course, Eddy grew up here (FHS Class of 1957). And Ralph brought a different perspective to it, and now Ron.

“They each have had a different perspective.”