‘Elf on the Shelf’ 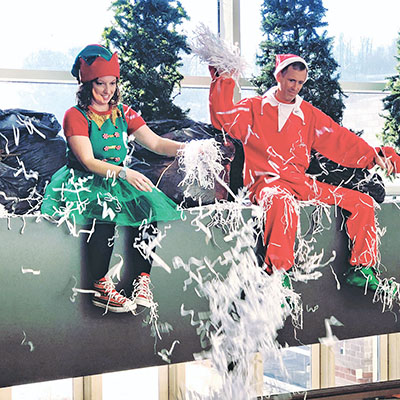 Hardin Valley Academy “Elf on the Shelf” elves were back in force starting Thursday, Dec. 12, when Liberal Arts Principal David Combs, right, and HVA social studies teacher Rebecca Furman sprinkled students with confetti snow between classes.
While young children may have experienced their own in-home “Elf on a Shelf” buddy during the holidays, Hardin Valley Academy students enjoyed their own live versions in the days leading up to Christmas.

“We hide in different places, and come out between classes,” explained Combs, who started the fun with former HVA STEM principal/athletic director George Ashe several years ago. “It was fun finding different scenarios and giving (students) something to look for.”

The Elves have been a huge hit with not only the students, but faculty, too.

“The kids and teachers, they love it,” he added.

Combs said he and Ashe had the idea for Hardin Valley’s “Elf on the Shelf” to give students a little levity during pre-winter break finals.

“There is so much testing going on, we wanted to give them a little fun, too,” said Combs, who noted an off-hand comment about his resemblance to the “Elf on the Shelf” also fueled the notion.

“Someone said that to me one day, and I thought, ‘Maybe I can go with that idea.’”

Even though Ashe retired at the end of last school year, Combs carried on the tradition this year, and got Speas and Furman involved.

The idea also has spread from its HVA beginnings, with Elves popping up at Knoxville Central High School and Hardin Valley Middle, too.

Combs said he enjoys what has become an annual tradition.

“We have had a lot of fun doing what we can to lift the spirits of our students during what can sometimes be a stressful time,” he said.

Combs has been posting about the shenanigans on Twitter, @HVA2008, and various other posts have been shared on several Hardin Valley Community Facebook pages.