A tool of witness, a memorial: FLC’s stained glass window 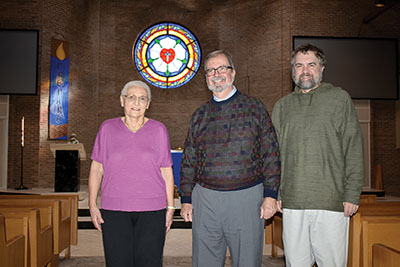 Faith Lutheran Church member Mildred Fenske, left, who funded the church’s new “Luther’s Rose” stained glass window (in background) is alongside fellow member Steve Dean, center, who helped spearhead the project, and the church’s pastor, the Rev. Robert “Bob” Stelter.
The late Joe Yarnell was born and raised Baptist, but one of his legacies will forever be tied to Farragut’s Faith Lutheran Church, where a stunningly appointed stained glass window, “Luther’s Rose,” recently was installed in his memory.

The circular 8-foot diameter piece was placed inside the sanctuary, behind the pulpit, the week before Thanksgiving, under the watchful eye of Joe’s widow, Mildred Fenske, and church member Steve Dean, who served as project manager.

“My rationale for choosing to remember Joe by giving the window is because the window is far more than just an ornament to make the church look nice and colorful,” she said. “It, like the church itself, is an opportunity for evangelistic outreach and for drawing people into a deeply personal and spiritual relationship with Christ.”

Fenske, who is a charter member of Faith Lutheran, had the idea to honor Joe after he passed away more than five years ago. The couple had been married for 34 years, and Mildred said Joe “never met a stranger. He ‘glad-handed’ everybody.”

Throughout their marriage, Joe attended Mildred’s church, while she attended his.

“I went with him and he went with me,” Fenske recalled. “He would always ask people if they had a church home, and if they didn’t, he would say, ‘I know of two good ones.’”

They were, of course, attending Faith Lutheran when the church moved next door from its original location on Jamestown Boulevard to the former site of St. John Neumann Catholic Church.

While Mildred considered how best to honor her late husband, she said she also had noticed how “it was very dark, by the pulpit, and the building doesn’t look very Lutheran,” realizing the addition of “Luther’s Rose,” also known as “Luther’s Seal, “would certainly make a difference.

“Anytime you see that, you know, it is Lutheran,” she said, noting the Seal had been designed by Martin Luther himself “while he was teaching at Wittenberg. The Black Cross stands for faith in Christ crucified; the Red Heart, for faith in the Savior; the White Rose, to show that faith causes joy, consolation and peace; the Blue Sky denotes that the joy of faith in the spirit is the beginning of heavenly joy to come; and the Golden Ring surrounding it signifies that such bliss in Heaven is endless.”

It was only within the last year that she was able to make the dream a reality, thanks to help and support from Dean, who agreed to manage the project.

“He has done a wonderful job shepherding it,” Fenske said.

They worked with local artist Ben Parham of State of the Art Stained Glass on the design.

“He is a true artist,” Fenske said. “We gave him the dimensions, but it was his idea to add the wheat and the grapes, which indicate the importance of the sacrament of Holy Communion.”

The design also features the words “Scripture Alone, Grace Alone and Faith Alone,” along with a small section imprinted with the dedication to Joe Yarnell.

“It is there, but I wanted it to be subtle — I didn’t want it to be showy,” Fenske said.

Masons from WASCO, which had performed similar work at the historic Campbell Station Inn earlier this year, worked more than three weeks on creating the space for the window to be hung.

Faith Lutheran congregants were able to see the window for the first time during services Sunday, Dec. 1.

“Ninety percent of the people had not seen it, and they were just in awe,” Dean said. “It is so vibrant and beautiful. It just brings something to the church that touches everyone — I would love for everyone in the community to come and see it.”

Fenske, who also is helping out with another stained glass project at the church, “which will make the Narthex brighter,” said Dean single-handedly shouldered the cost of the entire project, which he estimated will end up being more than $50,000.

Dean said Joe and he “both had very humble beginnings. However, throughout our lives, both of us were truly blessed; we were ‘blessed to be a blessing,’” Fenske said. “I hope that the widow of ‘Luther’s Seal’ will be a blessing, not only to all of (the members now) at Faith Lutheran Church, but to subsequent generations as well.”