Subcontractors approved; sidewalk shut down for next three months 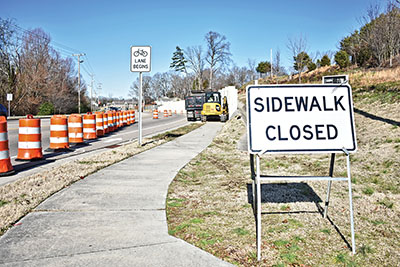 Farragut Public Works employees started prep work on the retaining wall along North Campbell Station Road last week, in preparation for the surface finishing work to be done in early 2020. Public Works stepped in as sub-contractor on the project, which has saved the Town thousands of dollars.
Following two years of discussion and challenges, the North Campbell Station retaining wall finally will undergo a surface transformation in early 2020 — with Public Works director Bud McKelvey’s leadership credited for the project coming in well under budget.

Project bids were requested earlier this year, but only two were received — both of which far exceeded the budget, one by more than 150 percent.

At that time, officials reconsidered the project and asked McKelvey if he would agree for Public Works to take on general contracting duties, with materials and work then being subcontracted out.

“After those first bids came in, and one was $350,000, I had a conversation with Bud” about overseeing the project, Town administrator David Smoak said. “He agreed to do it knowing it was going to be a big job and take a lot of time. But overall, our being able to save over 100 percent of the cost is significant.”

Public Works staff were on site last week doing some preliminary work in preparation for the construction, which will take place sometime early next year.

“They have until April 1 to finish, but we expect it to be done much sooner,” McKelvey said.

As of last week, the sidewalk fronting the wall is closed in preparation for the work. When work begins it would shut down the right lane of northbound traffic on North Campbell Station.

“We already went to Farragut High School and Farragut Intermediate School and told them about the project and how the sidewalk will have to be closed,” McKelvey said.

“We just don’t have a choice. The scaffolding is 40 feet wide and will cover the sidewalk.”

While the Town did not construct the wall, it has had to contend with the ongoing issues and upkeep.

It was completed by Tennessee Department of Transportation in 2010 as part of the multi-lane widening of Campbell Station Road, and had a simulated stone overlay, which was not properly attached leading to cracking and crumbling of the façade, before Public Works removed what was left in February 2018.

When asked about the recovering process, McKelvey assured the Board, “this is a totally different system. We will do it the right way.”