Smith a big player in Town transportation before his 2000 hiring 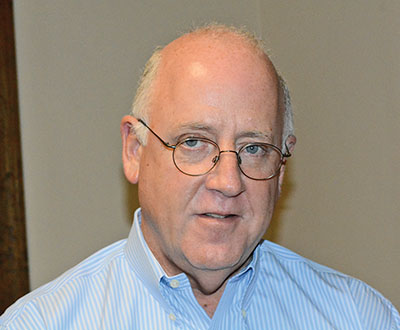 special road or highway — and dad would have to throw in a reminder.

“I would have to say, ‘hey kids, this is my road here,’ and of course they would roll their eyes and say ‘yeah, yeah,’” Smith, Town of Farragut engineer for almost 20 years, said with laughter about some of the roads and highways he led the way in designing in Farragut before being hired by the Town.

For example, “Old Stage Road to Lawton Boulevard and Kingston Pike between Jamestowne Boulevard and West End (Avenue) and Concord (Road),” he said about his work, from 1987 into 2000, “as a consultant doing roadway design. At that time it was Wilbur Smith Associates — they’re now CDM Smith here in Knoxville.”

A native of Cocke County, Town of Farragut engineer Darryl Smith recalled his first interest in an engineering career started while in high school there. Smith then earned a civil engineering degree at the University of Tennessee, Knoxville. “When I got out of school in ’85 I started working in Florida for about a year-and-a-half … that was a very good learning experience, and it was very good to get out on my own,” he said. Moving back to East Tennessee, “I started working at Wilbur Smith Associates,” he said (see main story on this page). As for coming to Farragut, “Dan Olson was the one who hired me in 2000, and I really had a lot of respect for him,” Smith said about the late Town administrator. Current Town administrator David Smoak “has been there for about 10 years and he does a terrific job. I really have a lot of respect for him,” he added. For all the changes in his department in almost 20 years, “The number of employees really hasn’t changed: I think we’re still at six,” Smith said. “… We’re a small staff, so I have to wear a whole lot of hats.” Smith and wife, Kim Cook, have three children and four grandchildren. This weeks Foundations: 40 Years of Farragut podcast is presented by .

“So it’s kind of nice to drive through some of the things I was working on 25 years ago,” he added. “… There’s a lot of satisfaction to accomplishing what you want to do, even if it takes a long time.”

Hired as Town engineer in February 2000, “Looking back, if you look on KGIS at some of the historical areas you can see how the Town has grown” since his hiring, Smith said.

Recalling the Turkey Creek/Parkside Drive development, “They finished up Parkside Drive (and) I think they opened it for traffic in 2001 if I remember right,” he said.

“I guess one of the more important roles I fill is working with the TPO, that’s the Transportation Planning Organization,” comprised of area municipalities within the Knoxville metropolitan region, Smith said.

Their goal is to “put together a Transportation Improvement Program to set priorities for funding of projects,” he said. “And through that comes most of our federal funds that we use for roadway improvements.”

As for the Town’s portion, “We’ve been very successful at obtaining money for our road projects,” Smith said.

Because the Town imposes no property tax, “We operate on a more limited budget for capital projects,” Smith said, adding a majority of federally funded projects are 80 percent federal portion and 20 percent Town/local portion.

“What I’m most proud of would be that we’ve been able to leverage so much in federal funding to improve our roads,” Smith said, estimating the total federal amount has been “probably in the $30 to $40 million range.”

In response to aging traffic signal equipment and technology, the Town will install an Advanced Traffic Management system to “improve our signal system throughout the Town … we’ll have central control,” Smith

said about the project, which will begin early next year for 26 traffic signals.

Adding closed circuit television cameras “can provide kind of an instant notification of what’s going on when trouble develops at a major intersection — if there’s an accident or something,” he said. “… We’ll be able to get alerts through e-mail that there’s a problem.”

Moreover, in order to better collect data from which to adjust times on traffic signals, “All of our 26 intersections will be radar controlled,” Smith said. “Radar receivers will pick up vehicles in the stacking (position) to determine the best way to operate. … If you’re on a side road and come up to Kingston Pike or Campbell Station (Road), if it doesn’t know you’re there you’re not going to necessarily get a green ball.”

As for cost, “We’re looking at something like a $7 million project,” Smith said.

Though saying his department “wants to help all we can,” often finding it “hard to say no” when a request for help from the public has to be turned down, Smith emphasized there are citizen misconceptions about what his department can do.

Preventing private property flooding, especially due to heavy rain in a short period of time, is one example.

“‘My backyard flooded and washed out my garden’ or what have you — I’ll hear that,” he said. “… Very often, the Town cannot do anything about drainage issues on private property.”

Concerning a “microburst” rainstorm, where “you get 4 inches of rain in 40 minutes, we’ve had that,” he said. “How do you

do design for that? You really can’t. And what happens then? You’re going have some flooding. There will be some damaged properties.”

However, “We do make sure everyone builds above the floodplain,” Smith said.

As for public misconceptions about road construction delays, Smith said the current Concord Road Widening Project — though pointing out its completely under the jurisdiction of Tennessee Department of Transportation — “is a good example. … They have to maintain traffic through there, yet at the same time there’s an amazing amount of utility work that has gone on and is currently going on.”

Overall, “We have a very demanding public and that’s a challenge all its own,” Smith said. “There’s a lot of very intelligent people in Farragut, and a lot of times they know enough to call me up and say, ‘this is what you need to do.’”

The bottom line in dealing with the public: “If you have to say ‘no,’ you better be right,” Smith said.

“My job is a long-term challenge,” he added.

However, “There is a lot of satisfaction to accomplishing what you want to do — even if it takes a long time.”