‘Ambassador’ LaMarche had a ‘family’ first impression of Town staff 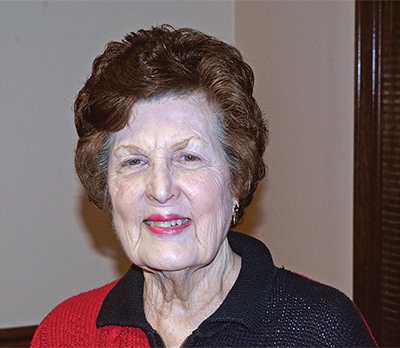 Dot LaMarche
If one person could be branded Town of Farragut’s ambassador to the state of Tennessee and nationwide, Dorothy “Dot” LaMarche would fit the bill.

But that story, perhaps, wouldn’t have unfolded if not for two things: a cell tower issue in Sugarwood subdivision and a great first impression upon encountering Farragut staff inside Town Hall.

Visiting Town Hall one day, “I saw how the Town was and how the staff was — it was like a little family,” said LaMarche, serving Farragut on the Board of Mayor and Alderman for 13 years (2003-2016 representing South Ward), including the final seven as vice mayor, who also served for years on Farragut Municipal Planning Commission as BOMA alderman representative.

Originally from Nashville, Dorothy “Dot” LaMarche and husband, Lou LaMarche, came to Knox County in 1994 “because of my husband’s new position. He’s been in the paper industry all of his career (now retired). He was a chemical engineer (who graduated from) Clemson,” she said. “… The last seven years of his career were here. “I was still active in nursing,” Dot added, with the couple coming here from Raleigh, North Carolina, where she served “as Patient Care coordinator of the emergency room” at Rex Hospital. Prior to that her nursing career included serving “as head nurse for four years” at Bradley Memorial Hospital in Cleveland. Starting her professional career as a elementary school teacher in Nashville, LaMarche also served in “intensive care nursing” at a hospital in Fredericksburg, Virginia. Her next move out-of-state was serving as an oncology nurse for three years at a hospital in Atlanta before the move to Raleigh. Lou LaMarche is a native of Charleston, South Carolina, who served his country as a U.S. Army veteran of 32 years — retiring as a colonel. Lou’s volunteer service to the Town, and to Farragut Museum, perhaps has been highlighted by his role for years as “Admiral Farragut” at various Town and museum-related events and re-enactments. The LaMarches have three daughters, six grandchildren and one great-granddaughter. This weeks Foundations: 40 Years of Farragut podcast is presented by Concord Christian School

“I felt such a good feeling. Everybody was friendly and kind,” she added. “And so that’s when I thought, ‘You know, I really ought to run for alderman.’”

However, this future vice mayor said the initial reason she “got involved in politics was because they wanted to put a cell tower in our neighborhood.”

That meant “getting involved” with Sugarwood subdivision Homeowners Association after she retired from the nursing profession.

However, saying she was frustrated, “I called (then Mayor) Eddy Ford, and I said, ‘Eddy, how to you get on this (F)MPC?’ I said, ‘Because I’m very upset with some of these people. They don’t listen to their constituents.’ They thought it was OK to have a cell tower,” LaMarche recalled.

However, “Two months later he called and said, ‘How would you like to serve on the Board of Zoning Appeals?’” LaMarche said.

She accepted, serving for two-and-a-half years. “I had never done anything like that before. Dan (Olson, then Town administrator) was a wonderful mentor to me. He encouraged me.”

LaMarche said she and the other BZA members fought Town leaders to get David’s Abbey Carpet the road sign they wanted –BZA won– and fought to allow developers of Vista subdivision along Virtue Road to keep “a beautiful column” at its entrance from being removed.

About the column, “I stayed up (one) night arguing with the Town, (saying) ‘this is stupid.’

“We compromised. … But it was never moved,” she added.

“Then one day the newspaper came out and said no one is running for (South Ward) alderman,” LaMarche said. “And I said to Lou (LaMarche, husband), ‘would you be my campaign manager?’

“‘Why do you want to do this, Dot? You’ll get all these phone calls,’” LaMarche said her husband replied. “I said, ‘Because I love Farragut — and no one is running.”

However, “As soon as I put my name in, five men put their name in,” she added with a laugh. “Two weeks before the election, three of them dropped out.”

That left “two young men half my age,” LaMarche said.

Saying she ran her campaign “on (building) a community center and no taxes,” LaMarche was elected in 2003.

Serving as vice mayor from 2009 to 2016 before stepping down, she pointing to the “big box” additions of Costco and Publix among the BOMA accomplishments she is most proud of during her years of service.

LaMarche said she was challenged by Ford to contribute on a much bigger scale.

“’You’re the only (alderman) retired. I want you to be involved on the state and the national level,’” she recalled Ford saying to her.

LaMarche became chairman of Tennessee Municipal League’s District 2, which was “my first dealing with TML,” she said. “Then I got on the TML Board and served on that for a few years.

“Then I decided I’d try out the National League of Cities … to become active on the NLC to represent the Town of Farragut and small cities,” LaMarche added. “… I wanted to make sure small cities were recognized and appreciated.”

The next step with NLC was “becoming chairman of the Human Development Committee. I chaired that for two years,” she said. “That gave me a way to get into the (NLC) Board.”

“… I worked really hard for small cities,” LaMarche added. “… We were able to change a lot of things to help small cities.”

Then next step was “getting involved with Women in Municipal Government; I became president for one year. That’s all elected women officials in the United States,” she said.

Staying for three days, which included “a luncheon at Fox Den,” in the end “they loved being here,” LaMarche said. “… It went off well.”

All of this recognition, beginning with TML, “was because Eddy Ford was my mentor, he had gone before me, and everybody loved Eddy and knew him,” she said. “He paved the way.”

She also credited the late Mayor Robert “Bob” Leonard for his advice when she first ran for alderman.