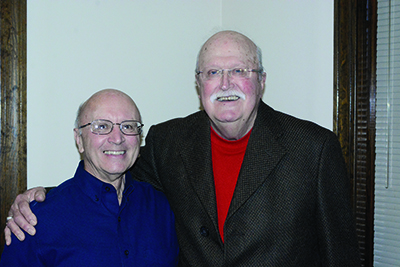 Jim O’Brien, left, and Terry Kerbs
A featured speaker at The Rotary Club of Farragut occasionally tells a story, usually one of overcoming huge adversity, never to be forgotten by those fortunate enough to hear it inside the walls of Fox Den Country Club.

Jim O’Brien, a retired colonel in the U.S. Air Force and Farragut businessman, has been a member of The Rotary Club of Farragut since retiring from active duty in 1994. After graduating officer training school, where he was commissioned, in November 1967, “What I expected was four years in (military service) and get discharged and come back and pick up my life where I left off,” he said. “As it turned out it was 27 years later when I retired on the same … field I had been commissioned on 27 years before.” His career featured “three tours in Europe, two tours in the Far East, multiple tours in the Pentagon and in Strategic Air Command,” O’Brien said. “And three tours in Texas — 23 moves in 27 years. “The last seven years of my military career I was in command positions: the smallest wing I commanded was 2,500; the largest was just over 10,000,” he added. “That 10,000-man-and-woman wing was on every continent but the Antarctic. I was dragging bags through airports I couldn’t even pronounce trying to keep up with them.” Originally from Durham, Kansas, Terry Kerbs is the longest serving member of The Rotary Club of Farragut. An RCF member since Dec. 11, 1980, “I think when I joined there were about 20 members,” he said. “We met at the Western Sizzlin’ off of Cedar Bluff (Road) for many, many years. “I love the organization. It has made me a better person quite honestly,” Kerbs added. “As you work and raise families you may get somewhat selfish. “But Rotary is an unselfish organization. It’s does a lot of good for the world.” Background Living in Farragut the past 36 years, Kerbs said the metro Knoxville area “is a great place to raise a family … it’s been a very rewarding experience.” Going back decades, “I was employed by 3M Company in Wichita, from there I went to work for Savin Corporation out of New York,” he said. After moves to Austin, Texas, and Tampa, “They gave me an opportunity to be a dealer for business machines — copies, fax machines, typewriters — ” in Knox County, Kerbs said, moving to Cedar Bluff “on Oct. 1, 1979, to open my business.” This weeks Foundations: 40 Years of Farragut podcast is presented by josh Hemphill State Farm

In fact, this story of a 16-year- old living in southern Louisiana “who was kidnapped, tortured and raped,” O’Brien recalled, featured the same killer-rapist portrayed in the popular movie “Dead Man Walking.”

Author of “Forgiving the Dead Man Walking” and a Knox County resident, “She shared all of her story with us,” he said. “… A story of reconciliation, a story of hope and joy is what she ended up focusing on based on her faith as a result of her ability to be able to forgive the perpetrators.

“One of the two who ended up kidnapping and raping her was eventually executed,” added O’Brien, a retired colonel in the U.S. Air Force (27 years) and owner of Achieve Your Dream travel agency who has been a member of The Rotary Club of Farragut since 1994.

As for RCF reaction, “There wasn’t a dry eye in the house, nor was there a sound while she was making her presentation,” O’Brien said. “It was awesome. … Her story of being able to get through that and all of the depression that flowed and (Post Traumatic Stress Disorder).

“She truly is a victor of coming through a (heck) of a fight.”

While Farragut Rotary and its 100-plus members are well-known locally for its annual Flu Shot Saturday each September, the story of how fighting to eradicate polio became linked to Rotary International, which happened in the early 1980s, has a close tie to RCF.

O’Brien said Bill Sergeant, “who was a member of the Rotary Club of Oak Ridge and who eventually became Rotary Club International vice president,” was confronted by Jim Bomar (of Shelbyville), then Rotary International president, about “why can’t Rotary do something to be able to attack what is a worldwide epidemic of polio?” O’Brien said. “That was how it all started.

“Bomar assigned the responsibility for launching the polio eradication campaign to Mr. Sergeant.”

With a statue in his honor in Krutch Park in Knoxville, “Bill Sergeant’s daughter, Patty Daughtrey, is a member of the Farragut Rotary Club,” O’Brien said.

Town of Farragut’s ties to RCF are most noticeably Ford driven.

Member Eddy Ford is the longest-serving elected official in Town history at 29 years (mayor from 1993 to 2009; an alderman on the first Farragut Board in 1980 and who served in that capacity until being elected mayor in ’93).

There’s also David Smoak, Town administrator since 2010 who is a former RCF president.

With Rotary in general, and RCF in particular having a strong percentage of its membership in the business field, the club also has several members of Farragut West Knox Chamber of Commerce. Notable among them are Bettye Sisco, past president/CEO, and Julie Blaylock, current president/CEO.

An even more direct tie to Town of Farragut and business is member Stephen Krempasky, executive director of Shop Farragut/Farragut Business Alliance.

While Farragut Rotary has had ties with Farragut High School, it currently serves Hardin Valley Academy by sponsoring the high school version of Rotary: Interact Club.

In fact, O’Brien said, “At one point during my presidential year (RCF), which was 1999-2000, we had a large Interact Club at Farragut High School — in fact, the largest in the entire District (6780, covering Middle and East Tennessee, except the Tri-Cities, Cookeville and eastward) was at Farragut; we had 220.”

To counter, Webb receives a foreign student, the rough equivalent of a junior, for one school year.

“Rotarians are a close-knit community,” said Terry Kerbs, longest serving RCF member at more than 39 years. “… What inspired me was there were business leaders throughout the community, here in Farragut especially, where we interacted, exchanged ideas, did business with each other, became life-long friends.

“That has stayed true all of these years,” he added.

“… I guess you could say, maybe, I’m the last man standing.”