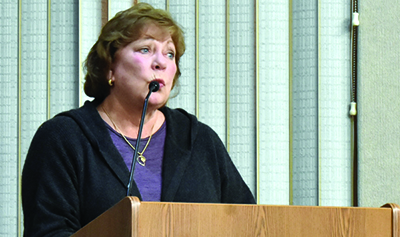 Farragut resident Carol Christofferson, who addressed the Board of Mayor and Aldermen last Thursday, Jan. 23, was among more than a half-dozen speakers opposing the 5G cell towers for residential areas approved by Farragut Municipal Planning Commission earlier this month.
For the second week in a row, upset Farragut residents converged in Farragut Town Hall boardroom, asking officials to do what they could to keep planned 4G and 5G cell towers out of residential areas.

More than two dozen people waited patiently Thursday, Jan. 23, until the Citizens Forum portion of the regular Farragut Board of Mayor and Aldermen meeting — always the final agenda item — to speak against cell tower applications from Towersource (working with MCI/Verizon) that were reluctantly approved by Farragut Municipal Planning Commission Jan. 16.

Four are set for residential neighborhoods, while the remaining seven are along Kingston Pike, Campbell Station Road or Parkside Drive.

Farragut residents, however, asked BOMA to find a way, with many asking them to petition state and U.S. representatives for relief.

Bill Bryant was among eight residents signed up to speak and talked about the unintended consequences of the cell tower approvals, speculating officials will “likely deal with a petition for five other companies to replicate the same network for 5G.

“I would like to encourage (BOMA) to elicit support from state legislators and (U.S. Rep.) Tim Burchett (R-2nd District), to try to see if there can’t be some appropriate limitations or state law” to address the situation.

Laura Squires told BOMA she felt “violated” as a citizen of Tennessee and of Farragut and asked if a map showing where the cell towers would be placed could be published in local newspapers.

Mayor Ron William and Vice Mayor Louise Povlin both stated no such maps had been forthcoming.

“Does Verizon have a fully-realized plan?” Povlin asked. “Can we ask for the full plan, or ask where the towers are going to be located? We needed an engineer the other night to answer our questions. One of my struggles is that I don’t know what I can and can’t ask for.”

“All we can do is try to get ourselves educated,” Hale said. “It might be worthwhile to have someone come and talk to us about it.

“You have heard me say this 1,000 times: the municipality, Town of Farragut and every other municipality in the state only has the powers that it is given by the state of Tennessee. It doesn’t have powers in and of its own,” he added. “We can’t do things contrary to what state law says. … My job, as the Town attorney, is to make sure we don’t do things that the law doesn’t allow us to do.

“We can go lobby, we can go try to have an impact. Believe it or not, a lot of people have been working on this for some time.”

“We’ve got to call Tim Burchett, (state Rep) Jason Zachary (R-District 14) and (state Sen.) Richard Briggs,” Squires said. “I spent a lot of time today with an attorney going over some of this information … there are alternatives; I feel what happened last week was a pass because we were afraid … but I don’t feel we have done all we can do, based on FCC guidelines.

“I need you all to pass a resolution, to go to the state of Tennessee and ask for an opt-out or a provision to wait, until we understand what the 9th Circuit Court ruling will be in California. (A current lawsuit that may impact the 5G rollouts nationwide). We need to keep it out of the residential areas and keep it away from our schools,” he added.

“I have passed on to the vice mayor what power local governments do have,” Squires continued. “We aren’t supposed to lay down like a possum in the road; we are supposed to stand up for our property values and our safety.”

“Have we ever done a resolution?” Alderman Scott Meyer asked.

“We usually have something very specific,” Povlin responded. “I’m not sure we have that yet. We need specific recommendations, do we not?”

Town administrator David Smoak said he has spoken to other city managers with similar concerns.

“They have talked about trying to limit the number of poles and requiring co-location with other utilities,” Smoak said. “Also we have pretty strong requirements for aesthetics in our ordinances, so those are three things I’ve been talking to Mr. Zachary about, and hopefully we can get a bill before the General Assembly soon.”

Smoak also said if BOMA was to offer a resolution, time would be needed to craft it.

“We couldn’t do one tonight,” Williams said.

Povlin encouraged the residents to reach out to their elected representatives. “It has more impact with our legislators if this is coming from you rather than us,” she told the audience.

Resident Marla Stairwood noted she had been following the issue “for several years. I understand the concerns about the aesthetics, and property values, but I don’t care what color it is, or what it looks like, if it causes cancer.

“(Health-wise) it will affect everyone,” she added. “I understand it is coming, but can we keep it to the commercial areas?

“There are still things local communities can do … we can force their hands, ask them to show us the required environmental review, and if they can’t do that we could at least maybe have a delay.”

Carol Christofferson of Sweet Briar subdivision was visibly upset as she told the Board, “You all are there to protect this community, and I don’t want to hear another word about you wringing your hands that you can’t do something. Even if it’s illegal, you have to stand up and you have do something. You have to say, ‘Cease and desist until all of what we just heard is straightened out.’”

“Carol I appreciate what you are saying,” Povlin said. “But I took an oath, we all took an oath of office and swore to uphold the law. ... I will try to do everything I can, but I will not disobey a law.”

“Please, I take you at your word that you will do something to protect the citizens of Farragut,” Christofferson said. “... We don’t want to be run over by the state of Tennessee … the FCC and the carriers because they are just plain greedy.”