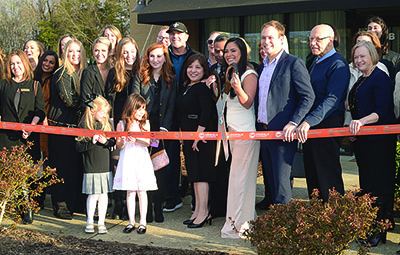 “When the client is here, the world stops,” she said. “It’s really about the experience.”

The studio, previously in Cedar Bluff, recently moved closer to Farragut at 10932 Murdock Drive, at the corner of Lovell Road.

In both cases, Taylor-Roman said she provides hair, make-up and staging for every client so they look their best. While her intent for the fine art photographs are to look like paintings, her professionals’ photography shots are made to “look like something out of Forbes magazine,” she said.

Remembering a childhood incident during which a photographer made her feel Taylor-Roman was “not photogenic,” she does not want others to feel that way. She added she feels it is her job “to make people feel beautiful.

“Everyone can exist in a piece of art,” Taylor-Roman added.

An award-winning, woman- and minority-owned portrait photography studio, it first opened five years ago in Renaissance | Farragut before Taylor-Roman moved her business to Cedar Bluff then to the Murdock Road location to “be closer to home” and because it offered more space.

“We had been getting persistent clientele … and we love the Farragut area,” Taylor-Roman said.

Through the years, she has garnered awards for her work and accreditations, both from Portrait Masters.

A first-generation immigrant, Taylor-Roman came to East Tennessee from Mexico in 2004 and became a naturalized citizen in 2017, said Daniel Taylor-Roman, her husband and the studio’s manager and chief financial officer.

Prior to taking on a photography career Taylor-Roman was a high school Spanish teacher with Oak Ridge Schools. When her daughter, Sophia, was born, however, her priorities changed and she sought a career with which she could spend more time with Sophia and ultimately chose photography.

“If you told me five years ago, when I was teaching, that I would (own a photography business), I wouldn’t have believed you,” she said.

Since Taylor Roman also “is an international award-winning photographer who travels extensively for commissioned work,” Daniel said she works by appointment only in Knoxville.

For more information or to book appointments, visit online at www.taylorroman.com, call/text 865-243-6463 or send an e-mail to saray@taylorroman.com