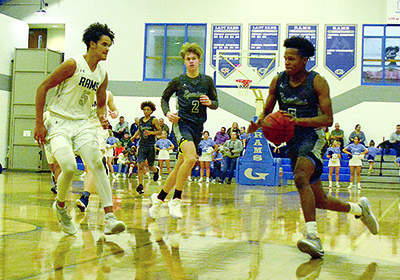 While the scars of losing a down-to-the-wire Division II-A state champship game to the Rams, a region rival, two years ago remain, Webb’s own 2019 state crown has helped soothe bad memories.

However, “You never really get over that one, that’s for sure,” Norris said after a convincing 63-44 victory at GCA Friday night, Jan. 31, extended the Spartans’ measure of revenge.

“We got off to a slow start, so we changed up what were doing defensively,” Norris said.

The win keeps Norris’ Spartans unbeaten in region play entering this week, led by four players with lots of experience.

As exhibited at GCA, “The faster we can play on offense the better for us,” Norris said. “We’ve got guys who can handle the ball and shoot the ball, and they’ve got a pretty high skill level.”

Pointing out his team’s unselfish attitude, “I’m blessed to have a great group that does that,” the Webb coach said. “That’s why I love coaching so much.

“I wouldn’t want to coach a lot of other teams.”

Overall, “I like where we’re at,” he said, adding his team’s post-season state tourney experience means “they know what’s coming, so every day in practice they’re working to where we can reach our potential and play with those (top state) teams.”