Women of WW II to get salute 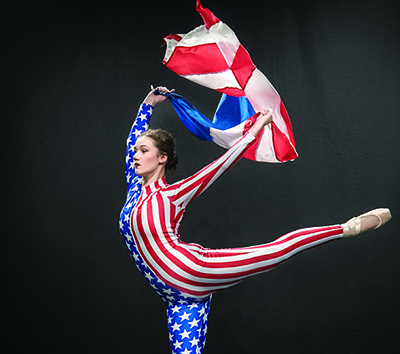 Audiences will have three opportunities to see this large-scale, in-depth production that explores the contribution women played in the success of the Allied victory in the Second World War.

More than 400,000 American women filled the vast holes in the labor force, freeing men to fight. They performed office and clerical jobs in the armed forces, drove trucks, rigged parachutes, flew military aircraft, welded and riveted and served near the front lines where some were captured as POWs.

Director Lisa Hall McKee of Farragut described the performance as not only stimulating and stirring, but also historically educational.

“These women gave up their husbands, sons, time, and some even their lives,” she said. “There were countless stories of heroism. It is an honor to bring them to life on the stage through dance, not just showing their roles but their courage and determination to contribute to the war effort.”

GO! will use large-screen projection behind the dancing, providing a historical and interactive display of actual film footage and photography, mixing the past with the present.

Act One will focus on efforts in America with famous characters such as Rosie and the Riveters, W.A.C.S. and W.A.V.E.S., Nurse Army Corps and an aerial display of the Women Air Force Service Pilots.

Act Two will turn to Europe, with an abstract representation of the Third Reich, a haunting portrayal of The Holocaust including Anne Frank high above the stage in her attic, and the energetic O.S.S. Spies featuring the sultry entertainer, Josephine Baker.

The performance will include more than 60 dancers, both pre-professional and professional, seven innovative choreographers, historical costuming and a wide range of music to include favorites such as Max Steiner’s “Mission to Moscow,” Vera Lynn’s “We Will Meet Again” and Madeleine Peyroux’s version of “La Vie en Rose.” Dancers will be led by musical director Amy Porter in

“Unsung Heroes” will be an unforgettable performance honoring these unforgettable women and is appropriate for all ages, from young children to those who actually remember the war,” McKee said.. “Everyone will leave informed, stirred, inspired and awed; not by us, but by those who we represent.”

Advance ticket prices range from $17 to 27. Complimentary tickets will be available to all active and veteran military personnel. GO! Contemporary Dance Works, a nonprofit organization, has produced more than 80 performances in the Knoxville Community since 2004. Tickets may be purchased by calling 865-539-2475 or online at www.gocontemporarydance.com/.