Burnette kicks it around, then comes back to town 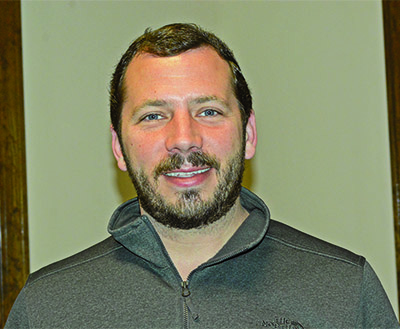 “A missionary was very close with (Carson-Newman University Football head) coach (Ken) Sparks in South Africa, and I was down there doing some sports camps and working in some orphanages,” Town Alderman Burnette (appointed as a South Ward representative in 2018) said about a trip through his church, First Baptist Concord, in 2000.

“… We were playing rugby with the local rugby teams, and he saw me kick the rugby ball and called coach Sparks and said, ‘hey, he’s coming back in a couple of weeks, and you need to go get him,’” he added.

A three-sport athlete at Farragut High School who went on to grab a football scholarship as a kicker at Carson-Newman University, Alderman Drew Burnette particularly remembers his time playing for head coach Donald Dodgen on the FHS varsity boys basketball team. A 6-foot, 190-pound forward who Dodgen labeled “hard-nosed,” Burnette labeled himself “an aggressive maniac out there.” Such passion originally didn’t translate into politics. Burnette said he didn’t seek the spotlight as a Town of Farragut elected official — though he has yet to be part of an election process after being appointed as a South Ward alderman in 2018. “This isn’t something I sought out or looked for … I was approached when there was a vacancy on the Board,” he said. “I believe I talked to (state Rep.) Jason Zachary (R-District 14, which includes Farragut). … I know Jason had mentioned something to the Mayor (Ron Williams)” and maybe David Smoak (Town administrator) saying, ‘hey, you ought to talk to Drew, he’s a Farragut guy, he’s born here, (went to) Farragut schools, loves the Town.’” However, “In talking to Jason, (I said), ‘I’m not into politics … this isn’t something I’m looking for,’” he recalled. “But Jason said, ‘Listen, we need people like you.’ “I took some time, talked to my wife (Brooke) about it, prayed about it and came back with a lot of questions,” he added. “I kind of reached out to David, I told him where my heart was. ‘“I would love to serve this Town. I don’t know if this is the way to do it, but I’m open to hearing about what an alderman does.”’ Saying he received “a good view of what the opportunities could be” from Zachary, Williams and Smoak, “maybe a couple of weeks” later, Burnette said he was ready to be an alderman. So, after serving about 18 months, “I love it. … I’m finally getting to the spot where I know what I don’t know,” he added. “… It’s definitely more time-consuming than I thought. “I’ve learned a ton.” This weeks Foundations: 40 Years of Farragut podcast is presented by Webb School of Knoxville

With this being his third mission trip to South Africa, and only a teenager, “it’s where I met my wife,” Burnette said about wife, Brooke. “We came back and immediately started dating, and got married soon after.”

Transferring from East Tennessee State University to C-N for the 2000-01 school year, accepting the football scholarship earned by being discovered in South Africa, Burnette began his college kicking career in Jefferson City.

If that happened a year earlier, straight out of FHS (Class of 1999), Burnette could have been an NCAA national championship-winning placekicker.

Those 1999 C-N Eagles missed what would have been a national championship-winning field goal in overtime, eventually losing the NCAA Division II title game to Northwest Missouri State.

Also a forward on the FHS Admirals basketball team, “I played three sports all through high school. … I needed a break … I turned down a football scholarship and a soccer scholarship and went to ETSU” in 1999, said Burnette, a regional vice president for sales for a medical device company, Olympus, who represents eight states.

About the Town’s relationship with Farragut schools, “We’re talking about it on a monthly basis,” he said about the Board of Mayor and Aldermen. “We’ve got some Board members who are very passionate about keeping the connection.

“Recently I got to do the ‘Principal for a Day’ thing at Farragut High School with (principal) Dr. John Bartlett, and I was really blown away,” he added. “He’s an amazing guy with strong character and strong leadership abilities, which makes me very, very excited to have him here in Farragut.

“As well as Wes Edmonds (Farragut Middle School principal), getting to spend some time with him during the past two or three weeks.”

“… That Farragut brand of school is a flag planted in our Town that people can see from all over the country as test scores come out and as accolades are released,” he added. “Our schools are so vital to our Town’s growth, to our Town’s future. … People want to live here; people like the Farragut education.”

Having witnessed FHS and other high school students living in Town who have served as non-voting representatives on Farragut Municipal Planning Commission and Town committees and boards, “They are top-notch. They speak at a level that, early on in my (adult) career, I wasn’t speaking at,” Burnette said.

“There’s perceptions from those outside the Town, and even inside the Town, that Farragut has been very difficult to deal with,” Burnette said. “We know that; and I think there have been times in our past where that’s been very, very accurate.”

However, “On the inside, what I’ve seen in the past year-and-a-half is a Town staff — and I mean full Town staff — from codes inspections to the leader of the Town being (administrator) David Smoak, how much the entire Town staff and the Board (of Mayor and Aldermen) care about how we come across, and how we show ourselves and how dedicated they are to making a good experience out of building a house in Farragut or having a business in Farragut” he added.