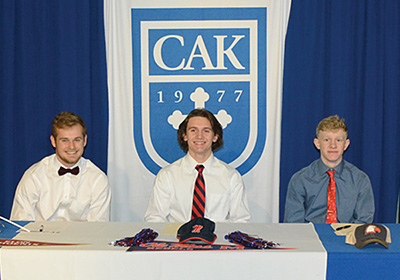 Football players who signed in the gym in an early-morning ceremony were Gavin Campbell, Andrew Kregel and Kenneth Parker-Smith.

Campbell, an offensive and defensive lineman, signed with East Tennessee State University. Kregel, also a lineman for the Bulldogs, will play his college football at Maryville College. Parker-Smith, a wide receiver and defensive back, signed with Union College in Kentucky.

play in Maryville for the Scots.

For Campbell, who said he will major in business and finance, “The coaches there showed me a lot of love. It’s a nice campus, and I just enjoyed it. It’s close to home and it’s a small campus, and I liked the student-to-teacher ratio.”

Kregel said, “It felt like they really wanted me at Maryville. They care about me as a

person and a player. They really care about me. They care

about my future after football.

Parker-Smith said “the smaller school is a better deal for me. I wanted to play, but the coaches want me to get a degree. My

first goal is to get my degree. That’s the most important thing.

“I’m undecided about what I wanted to do, so the coaches

told me to take a semester and take some classes and decide what I want to do,” he added. “I’m looking at something in business, maybe.”

Boles said Georgetown is “a Christian School and they have a pretty chapel, and I really liked that. I’m going to major in nursing and they have a really good program. “

LeJeune said, “The plan is for me to move on and play baseball after I’m done there. That’s my goal.

“I like the academics at Cleveland State and I’m going to major in exercise science,” he added.