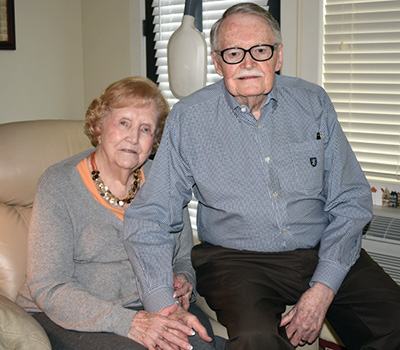 Donna and the Rev. Robert “Bob” Parrott have been married 61 years. The couple, who currently reside in Autumn Place, Farragut, only saw each other a dozen times before they married but had forged a special bond during their very first meeting.
The Rev. Robert “Bob” Parrott and Donna Parrott have been richly blessed during their lives, perhaps never more so than when they met crossing the Atlantic Ocean on the Queen Mary in 1957.

Though their first meeting wasn’t on Valentine’s Day, the couple’s romance aboard that ocean liner has made every day special since.

From the moment they met, “I knew there was something special about her,” Bob said last week when the couple was interviewed in their cozy apartment in Farragut’s Autumn Place senior community.

Bob, a Methodist minister from Louisiana, and Donna, a Snyder, Texas, school teacher, each were traveling with friends when they set sail on the deluxe ocean liner in June 1957, ready for a summer abroad.

“We each had been saving money and were on a tight budget,” Donna said.

The ship was traveling from Newport, Virginia, to Cherbourg, France, and the couple met in the dining room their first night at sea.

“I didn’t go on the trip to find someone else, but I was certainly open to it,” Bob said in a short but sweet You Tube film, “A Queen Mary Romance” the liner’s parent company made about the couple in 2016.

“We were originally supposed to sail on the Queen Elizabeth, but at the last minute we were able to get on the Queen Mary. The Queen Mary had a name and a history ... it was the fulfillment of a dream,” he added. “I was astounded by the size and the glamour … and I remember seeing Donna (that first night) and how she fit very well in the magic of the room. I can still see Donna in that lovely black dress.

“This was my dressy outfit, for the ship,” Donna said. “It was a special dress for a special occasion — I just didn’t realize how special it was going to be.”

There was sadness on both sides when they parted, even though they had made plans to meet in Paris and Salzburg, Austria, before returning stateside.

“But we were confident we were at the beginning of something, not the end,” he said.

“It was as though we knew each other immediately,” Donna added. “We just spoke the same language, from the very beginning, and had so much to talk about.”

The couple traveled separately back across the ocean, but made plans to drive to their respective homes together from the East Coast.

“By the time we returned to the states we knew sometime was happening here,” Bob recalled.

The distance mattered little, and the couple married in Dallas, Texas, on June 19, 1958, exactly one year to the day of that first shipboard meeting.

“Counting our wedding day, it was only the 13th time we had seen each other,” Donna said.

So began a long and vibrant marriage for the couple, who have been married for 61 years.

They came to Knox County in 1964 for Bob’s job, and have been here since.

While Bob — who also is an author and genealogist — took the helm at the Wesley Foundation on the University of Tennessee-Knoxville campus, becoming its longest-serving minister, Donna took some time away from teaching to raise the couple’s children: son, Robert Crittington, nicknamed “Crit,” and daughter, Leslie.

Donna ultimately returned to her career, and was an administrator with Knox County Schools, serving as principal at Rocky Hill, Oakwood, Pleasant Ridge and Sequoyah elementary schools before retiring in 1999.

The couple also have four grandchildren.

The Parrotts don’t really see it as a “secret,” the key ingredients of their marriage that have made it such a great and lasting partnership.

“From the very beginning we did not allow the idea to even be considered that marriage was not going to work for us,” said Bob, who similarly has counseled many other young couples during his career. “We had rough times, but everybody has rough times. We respect each other, love each other and complement each other.

“It sounds like a fairy tale, but it is all very real,” he added.

“How they met and their lifelong love is so beautiful in a world where faithfulness and commitment seem to no longer be valued,” said Crit, who also noted, “They are perfectly matched.”

“Shipboard romances do last,” Bob said. “Ours has lasted, and has flourished, since that day.”

“It has been a life that was truly meant to be,” Donna added. “It was a chance encounter, but one that turned into something worthy of a lifetime together.”