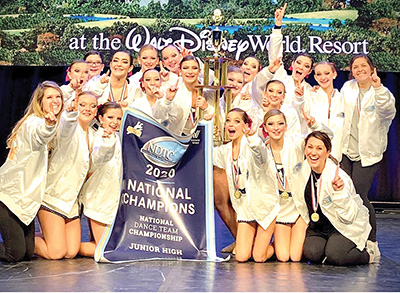 It was a program first, as FMS had never won top national honors in the Pom division, but did win first place for Junior High Jazz in 2015.

“It was such a wonderful experience,” said head coach Victoria Ogier, who along with assistant coach Tatum Allen had guided the 16-member team to state titles in both Jazz and Pom earlier this year.

“I give credit to the students,” Ogier added. “They’re all so dedicated. They constantly work outside of practice to make sure everything is just right.

“We have a very young team — only four girls are eighth-graders — but they are very hard workers and very mature for their age.”

“This team only has one girl that is a three-year member, seven only have one year experience, and eight are newbies with zero pom experience, so the first national title in Pom for FMSDT was amazing,” said Keri Fox Stickley, whose daughter, Cassidy Stickley, is among the newbies.

“They all have great technique, but really, the biggest thing for all of them is their work ethic — it is unmatchable. They are always looking at their videos and looking for ways to improve. They were also confident enough to make suggestions to me on how we could do our routines better,” she added.

“I’m just so proud of them. They are not only a great team, but they are good kids in how they hold each other up and love on each other.”

Having to come from behind on the final day of competition, “The coaches, girls and parents knew the team was in fourth place going into finals with only .8 separating first from fourth place, so it was anyone’s game,” Stickley recalled.

“Finals morning you could tell the girls were ready to leave it all on the floor, and that’s exactly what they did. It was the best they had ever performed,” she added.

It’s also been a big year performance-wise for Allen, a member of the University of Tennessee Dance Team also winning a national title in its division last month.

While Allen (Farragut High School Class of ’18) and Ogier (FHS Class of ’15) are long-time friends and dancers, Allen has the distinction of being part of both the 2017-18 FHS national champion team and the 2014-15 FMS national title team.

National title defender, Farragut High School’s dance team, which had cinched two back to back titles, fell short of the win in Orlando this year, but did cinch second place for both Small Varsity Pom and Jazz.

“We are also all so proud of our high school team,” Ogier said. “We look up to them so much.”