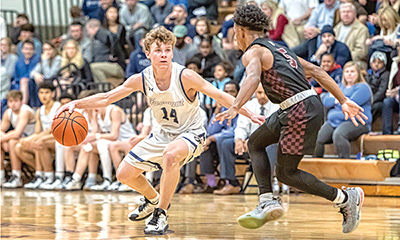 “I’m really proud of my team,” Parrott said after the Bulldogs closed out the regular season with a 61-46 District 4-AAA victory over rival Farragut at a packed Lynn E. Sexton Gymnasium Feb. 14. “We’ve won 21 ball games and a lot of people can’t say that.

“They especially can’t say that after they had to replace 100 percent of their offense,” he added.

“But now, the real season starts and we’ll have to see what we can do there.”

Bearden (21-7 overall, 12-2 in District 4-AAA) will host the district tournament and be the No. 2 seed and have an automatic bid to the Region 2-AAA Tournament in its quest to defend its Class AAA State Championship.

But the Bulldogs had to gut this one out against the Admirals (14-15, 6-8), who had a 41-40 lead heading into the fourth quarter despite getting nothing from leading scorer Robby Geron, who was saddled with early foul trouble.

Geron scored all five of his points over the final eight minutes of the contest. Trouble for the Admirals was that no other FHS player scored during that stint, as the Bulldogs closed the game on a 21-5 run.

“We just couldn’t score. For some reason, the ball just didn’t go through the hoop and that’s atypical for us,” FHS head coach Jon Higgins said. “I don’t think we had a (3-pointer in the second half) and that just doesn’t happen to us.”

Higgins wasn’t all that unhappy after the loss and noted that his team beat Fulton for the second time this season Thursday, Feb 13.

“The shots just weren’t going down and that’s part of the game,” Higgins said. “But we’re playing well right now. I think we’re really playing well, but there are some things we can fix.

Farragut had leads at the end of the first, second and third quarters despite the fact that Geron was sidelined with foul trouble.

“We played well and were ahead by one point going into the fourth quarter and Robby didn’t score at all,” Higgins said.

While Geron had his offensive struggles, the rest of the team picked up the slack early. But the Admirals didn’t have a player post double figures in scoring.

For Bearden, which lost point guard Iziaha Bredwood to injury early in the contest, Cahlib Edwards had a game-high 22 points. A.J. Pruitt added 12 and freshman Jake Poole finished with 10.

Edwards said that his first-ever road game against the Admirals was intense and it was also an experience that he would never forget.

“This was a great atmosphere and it was a tough game, he said. “You couldn’t hear in here.

“When I get in a game like this, I do two things. I trust my teammates and I trust God. I have great teammates and we all play together. We’ve had a good year and now, we’ll see what God has in store for us the rest of the way.”