Where there is ‘Smoak’, there is the growth 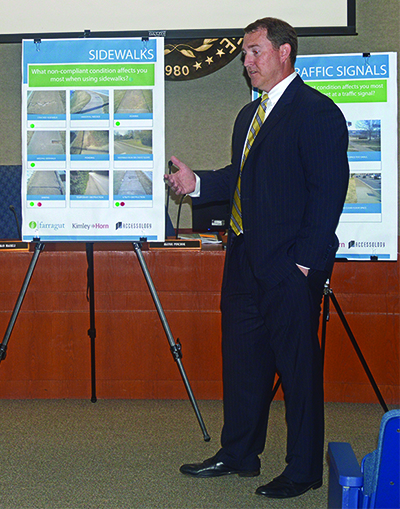 In defining his job as Town of Farragut administrator, David Smoak said with a smile, “It’s funny, I had a bunch of 6-to 13-year-olds ask me this the other day. It was actually at St. John Neumann School, we got to have Career Day over there.”

However, “Most people in the community don’t know what Town administrator is either, frankly,” added Smoak, who celebrated his 10th anniversary as administrator earlier this month overseeing all departments of non-elected Town government, which adds up to 54 full-time employees.

Born in Charleston, South Carolina, David Smoak grew up in Marietta, Georgia. Receiving his undergraduate degree in political science at Presbyterian College in Clinton, South Carolina, Smoak earned a master’s degree in public administration at the University of Georgia. After graduate school at UGA, “My wife (Sonya) was getting into optometry school at the Southern College of Optometry in Memphis, so we moved out there,” Smoak said. A financial advisor in Memphis while waiting for his chance to serve in municipal government, Smoak had to wait about a year before the City of Collierville “contacted me about a budget analyst job,” he said. “… I got the job and started from there.” Working his way up to assistant city manager while in Collierville for more than nine years, Smoak’s opportunity in Farragut would be the next step up the ladder. “I was in a community very similar to Farragut,” Smoak said about Collierville, which is north of Memphis in Shelby County. “… Farragut was very much like where I was coming from, and I thought it would be a great opportunity to really help a city — it was a lot smaller city (than Collierville) — but still be able to grow and develop and have good aesthetic standards. “There’s a great quality of life here, great education, opportunities for children,” he added about Farragut. “Low crime. … And how financially sound the Town is.” Visiting Farragut and “driving around to take a long look at the community and go into all the neighborhoods and subdivisions,” Smoak said when he and his wife “were making that choice 10 years ago, we thought this was a great place that we would want to live.” The Smoak couple has twins: Evan and Olivia, 8. This weeks Foundations: 40 Years of Farragut podcast is presented by The Villages of Farragut

With Town leaders having drawn retailers Publix and At Home to Farragut during the past 10 years, along with roughly 600 employees and their spending power with services-based Sitel, luring Costco to Town highlights the deals either brokered, or at least initiated, through Farragut’s regular attendance at the annual International Council of Shopping Centers gathering in Las Vegas within the past decade.

With ICSC, “They put all these brokers, retailers, developers all in the same room, so you have access to them that you don’t typically have here in Farragut,” Smoak said. “… I can tell you over the years that most retailers know Farragut and they know Turkey Creek.”

Pointing out a Town shift in philosophy, “I think when we went early on we did focus a lot on retail because we had some retail shops to fill,” Smoak said. “… But I think over time our shift has changed more to developers, because developers are the ones that bring all the retailers with them.”

During the past 10 years, “We’ve doubled our sales taxes,” Smoak said. “Right at 1,000 new homes have been built in Farragut in a decade. … In the last 10 years we’ve added $362 million in new residential housing.

About reaching out to businesses and developers, Smoak cited the recent example of “the entertainment district north of the Interstate” along Outlet Drive, which will welcome national attraction TopGolf to Town with its anticipated groundbreaking sometime in late summer or early fall.

“We knew that was a great area for that to occur,” Smoak said. “… I think, over time, we’ve been able to look at some of our ordinances and amend them to help in certain situations — but still keep a high standard in place.”

About Farragut being unfriendly to businesses and developers, “I heard a lot of the comments when I first got here … but I can’t comment about previous Boards” before he came to Town, Smoak said.

To remedy the problem, “I think a lot of it has to do with leadership,” he said. “… Anytime you have a leadership shift and change, certainly just talking to new faces can sometimes help bring conversations back up again.”

Though the Town may be considered more business and development-friendly in recent years, “We have design standards now, which we didn’t have prior to, I think, 2012,” Smoak said. “We have a Future Land Use Plan and many things in place that are going to guide what we are going to look like over the next 20 to 30 years.”

Moreover, “I think developers appreciate having something in front of them to say, ‘here’s the roadmap to develop here,’” he said. “It’s very clear now.”

Although saying there was a Land Use Plan in place when he became administrator, “It was very vague,” Smoak said. “We

put a Land Use Plan, with a map, together to make it more specific.”

Moreover, with the Land Use Plan, “We’ve been going through amendments to that over the last year or so,” he added.

Smoak said the Town gets many complaints about speeding, saying recent traffic studies have concluded roughly 85 percent of all motorists in Town drive “well over 10 mph” beyond the speed limit.

With no Farragut Police Department, having to rely on Knox County Sheriff’s Office manpower reportedly stretched thin already, “We don’t do enforcement, and I think the enforcement arm is something that’s a very important part of handling that,” Smoak said.

Moreover, “We can only do so much by design,” he added about traffic calming measures, especially within subdivisions and other neighborhoods that might include speed humps or narrower lanes.

“The No. 1 thing the community has told us, through surveys that we’ve done, is that they want a town center,” Smoak said. “I think we’re getting really close to hopefully that happening soon. … It has taken years of talking to developers about potential sites for that to happen.”

Combining residential and commercial and creating walkability between where you live and shop with the town center concept, “I think that’ll be a real game-changer for our Town, in the middle of our Town,” Smoak said.

As for specific locations, “I think what you’re hopefully going to see is a redevelopment of that old Kroger building,” he said, adding this “could be” the hub of a town center.