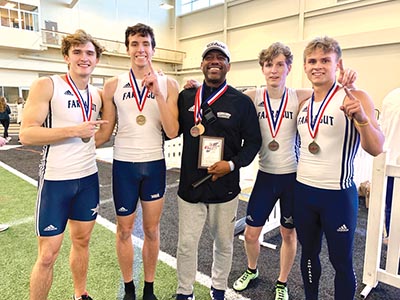 With Admirals coach Erik Reeves are Farragut High School 4 X 400 state champions, from left, Evan McFerran, Vincent Broda, Scott Grunau and Conner Evans after accomplishing their state feat at Vanderbilt University in Nashville Saturday, Feb. 22.
While we were unable to secure quotes from Bryan Brown, HVA track & field head coach, about his boys team’s state title, we will continue to pursue this in order to properly detail the Hawks' stellar state effort.

What’s one of the best kept secrets, when it comes to stellar performances, in Farragut?

If not the outright winner, a leading candidate would be Farragut High School’s 4 X 400-meter relay team — which is coming off a state championship performance at Vanderbilt University in Nashville last weekend.

However, the high school track & field world certainly isn’t in the dark about the fast Admirals foursome of Scott Grunau, Evan McFerran, Conner Evans and Vincent Broda: they are the No. 9-ranked 4 X 400 team in the nation — and they helped their team finish third in state.

“Coaching athletes like this makes it easy to coach,” he added.

Also aided by the coaching of Erik Reeves, former All-SEC hurdler who coaches FHS relays among other duties, the foursome has earned the right to enter New Balance National Elite Meet in New York Sunday, March 15.

Grunau finished third statewide in the 400; McFerran placed fourth in the 200; Grant Coggin was fifth in pole vault; and Tyler Ebbert claimed sixth in the 800.

Other top girls finishers were Anna Moore’s fifth place effort in wight throw and Hu’s sixth-place finish in the mile.

As for the overall health of the program, “We’re over 100 athletes now, and we’re doing fantastic,” Allison said.