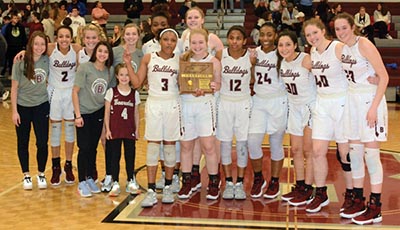 With key plays late from freshman post Avery Treadwell — a three-point play under the basket as part of six fourth-quarter poitns, two blocked shots and a handful of rebounds — Bearden overcame a 30-27 deficit to slowly pull away late.

“At halftime coach told us to keep playing hard and working hard as a team,” Davis said. “I think we played well as a team and we pulled through to get the win.”

As for defense, “I think rebounding was key to the win,” Davis said.

In the late going, “We came up with a gameplan and we executed,” McLaughlin said. “Our will to win drove us so hard on the defensive end. We were like, ‘We’re not losing this game.’”

“We set very high standards for them, but they embrace them,” Underwood said.

“I couldn’t be prouder of them, they’re so unselfish,” he added. “In this day and age there’s so much pressure to promote yourself ... but they just want to win.

“They’re a family, they’re sisters, and they work hard.”