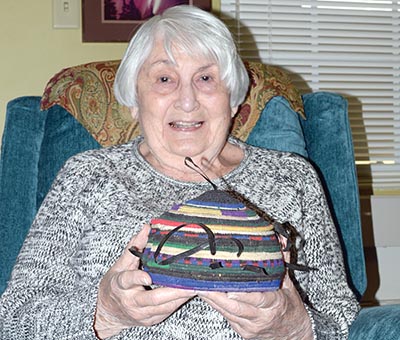 The walls of her home are lined with photographs of places her work has taken her — India, Nepal, Alaska and Victoria Falls in Africa, to name a few.

Her work also has taken her to England, Zimbabwe, Liberia and Vietnam. She has witnessed the effects of polio, hunger and had seen death — yet her demeanor remains cheerful and undaunted.

She was born Marion Estelle Bayless to Carter and Fairy Bell Bayless in Pressman’s Home, a trade school and union retirement home in Hawkins County, where her father was teaching an apprenticeship for linotype.

“We lived (at Pressman’s Home) for three years,” Marion recalled. “My father was a linotype operator at the Knoxville News Sentinel. He always wanted me to go into the news business. He would talk it up.”

However, Marion had another plan – missionary work.

“I followed my aspirations,” she said, having graduated from Vanderbilt University with a Bachelor‘s degree in nursing and working in the hospital’s polio unit.

“There were only 14 polio units in the United States,” Marion added. “In Vanderbilt, every patient was on an iron lung – even children. A lot of patients died.”

But Marion was there in 1957 when the Salk vaccine was discovered.“It was the most wonderful thing,” she said.

After graduating in 1957, Marion headed for Zimbabwe, then known as Rhodesia.

Marion spent seven months in Edgemore, England, working in a hospital, which had an epidemic of the Asian flu.

Marion then spent five years as a missionary nurse in Zimbabwe, for which she got a stipend -- $3,000 a year – and room and board.

Her job was to give anesthesia during surgeries, work in the blood bank and teach nursing to African students.

While on a camping and hunting trip in Mozambique with 13 other missionaries, Marion met and fell in love with the man she expected to marry — Taki, a Greek professional hunter. That would not come to be, though, as Taki was killed by an IED 10 days before their wedding.

She never married, remembering, “I came close many times, but I just didn’t go through with it. It just didn’t seem right.”

Marion later returned to the states, earning her master’s degree in nursing education and administration in 1967. Then her work took her to Liberia for three years, India for five, Vietnam for two years — in 1971 and 1972, during the Vietnam War — Montana for two years and Alaska for 20 years.

While still in Alaska, Marion volunteered in the Sudan for seven months, helping Ethiopian refugees who were afflicted with a famine.

“I’ve never seen so many deaths,” Marion said. “It was terrible. The people were just so thin and sick – tuberculosis, dysentery and cholera were rampant,” she said. “It just wiped them out.”

Still, Marion holds two memories dear: The time some Ethiopians made her a gold cross.

And at the place where thousands of were buried, she discovered “where so many people perished, there was life again.”