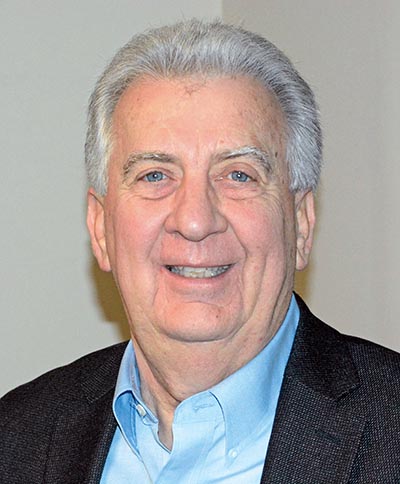 Ron Pinchok
Confessing a love for sports and the outdoors, Alderman Ron Pinchok recalled how he first became involved with Town of Farragut government.

“When I first moved here (32 years ago) I enjoyed the parks tremendously and the greenways,” said Pinchok, first elected as a South Ward alderman in 2014 who became interim Mayor of Farragut for a few months in 2018 when former Mayor Ralph McGill resigned due to health issues.

Having retired as a sales and marketing development representative with Hallmark cards in 2010, Pinchok said he “played a lot of golf and tennis the first year I was retired, but I said, ‘I’ve got to do something else, I’ve got to get more involved.’”

A 32-year resident of Farragut, Town Alderman Ron Pinchok said he grew up in Pittsburgh — first mentioning “a lot of mountains” near this southwestern Pennsylvania city best known for steel and Steelers NFL football. Saying he “loves sports” and “loves the outdoors,” Pinchok added, “The Smoky Mountains drew me” as a selling point for moving here. Along with his wife, Debbie Pinchok, “We’ve hiked Mt. LeConte, we’ve hiked a lot of the trails over in the Smoky Mountains,” he said. An employment opportunity plus a recommendation from a high-ranking company official were the other selling points. “I was working for Hallmark cards, in sales and marketing and marketing development, and I was in Dallas, Texas, at the time,” Pinchok said. “I found out about a position opening up in the Knoxville area, they were creating a new district here, so my boss at the time suggested I interview for it,” he added. Traveling to Atlanta, Pinchok said he “met with the (Hallmark) vice president there … and he said, ‘There’s a little town up there outside of Knoxville called Farragut; I recommend if you take this position you move into Farragut.’ “He said it had only been around about six years, that it had incorporated recently,” he added. As for first impressions, “We really liked it — we were told the schools were good,” Pinchok said, as the couple had three sons needing to continue enjoying a good education. “… Felt right at home, right away.” Moving into Fort West subdivision, “We’ve lived in the same house for 32 years,” he said. “When we moved in there were only nine families there, it was a brand new subdivision. “Now there’s about 250 homes.” This weeks Foundations: 40 Years of Farragut podcast is presented by .

Former Alderman Jeff Elliott (2009-2014), who lived near Pinchok, “was on the Parks committee … and suggested I consider applying for the committee,” he added. “I got appointed to it in 2011 — and a year later became chair of that committee.

“And that’s when we were looking at the first Master Plan to develop (McFee) park, and that was exciting.”

He explained how “looking for new locations of stores” — as part of his job with Hallmark cards, which brought him to the Knoxville metro area — “and helping design the stores and build the stores on paper” helped him understand “the potential for the park.”

A run for alderman

With Elliott not running for another alderman term in 2014, “He said, ‘You ought to run; you’ve got some experience in Town business … you’d be a good candidate,’” Pinchok recalled.

Thinking “‘I’m not a politician,’” Pinchok said he “really didn’t want to do that” at first.

“Mayor McGill approached me a couple of days later and, after we talked at length, said I had to run — so based on those two conversations I chose to run,” he added.

With a laugh, Pinchok recalled that current Town Mayor Ron Williams “a month or so later decided to run against me, and was a very close friend of Mayor McGill’s.”

Saying Elliott “had given me some idea of what to expect” in his first campaign for elected office, Pinchok won “by about a hundred votes” against Williams.

Among things he’s most proud of having a hand in creating, Pinchok said he had a hunch about making use of the former location of Faith Lutheran Church, 239 Jamestowne Bvld.

“One of the first things I did” when elected was approaching Town administrator David Smoak and saying, “‘The old Faith Lutheran Church is available, we ought to be looking at that as a community center.’”

Though saying a community center was something the late Mayor McGill “had been working on since 2012,” Town studies indicated Farragut couldn’t afford to both buy and renovate the building.

However, Town and Knox County officials came together in 2018 and agreed to make the facility jointly a Town community center and a new location for West Knox County Senior Center, which replaced the over-crowded Strang Center, splitting the cost.

While the senior center opened in January 2020, the community center essentially was fully operational in February 2020.

Another Town accomplishment Pinchok said he is proudly part of is the $8 million next phase of McFee Park expansion.

With Pinchok heavily involved in the growth of the parks since his committee days dating back to 2011, “When the bids come back we’re ready to approve that and hopefully break ground in a couple of months,” he said about the preliminary plan to add a second entrance plus a pavilion, tennis courts, a basketball court and a new restroom — though something may have to be cut to make budget.

“That’s something I’ve been working on for about nine years,” he said.

However, to boost overall revenue “and help our small businesses — whether it be restaurants, whether it be hotels or small retail businesses — we’ve got to drive more people to our Town,” Pinchok said. “To do that we need to have a lot of sports activities, sporting events.”

Looking to the future, “One of the things I would like to see down the road is a sports complex, maybe an indoor swimming pool complex. … It would help with tourism, help with our hotels,” he said, adding “someone is going to have to come in and do it on their own” as a for-profit facility.

“We need to find a way to build three more.”

He also looks forward to a Town Center, though “we know it’s going to take time.”

“We want it to be a walkable type development (being able

to walk to shopping areas from your place of residence, all within the center) where people