At the top with VP Quayle, Meyer’s HOA work led him to BOMA service 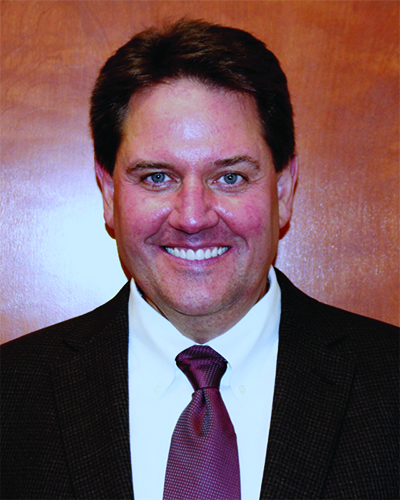 Not necessarily intending to move to Farragut after being a Knoxville resident for more than 15 years, “We just happened to land in a house in Fox Run subdivision … seven years ago,” said Farragut North Ward Alderman Scott Meyer, a native of metro Indianapolis.

His health care industry work brought him to Knoxville in 1997.

“When we moved in, the subdivision was extremely welcoming. We got involved right away. … We just became connected with our neighbors,” Meyer said.

As a graduate student at Indiana University who knew the school president, Scott Meyer turned out to be a big asset to Vice President Dan Quayle and First Lady Marilyn Quayle in the late 1980s and early 1990s. The IU president “would loan me out to the Quayles, that’s how I learned how to throw a good party,” said Farragut Alderman Meyer, who represents North Ward. “… I learned how to organize receptions. … the food and the bands.” Having met the former VP, he would say “‘Thank you for your hard work, it’s a great reception, we appreciate you,’” Meyer recalled. “And to shake hands with ambassadors of Southeast Asian countries was, for me at that time, overwhelming,” he added. Growing up in a suburb of Indianapolis, Meyer moved to Knox County in 1997 “as a single man.” “I knew the day that I arrived that this is where I was going to live for the rest of my life,” he added, “Because of the people; because of the culture and the history and the community that I found. “I went to a church right away and found a great body of believers who are still friends of mine to this day. I just felt a greater sense of belonging, oddly enough, here in Knox (County) than I did where I grew up.” Though saying Indiana “is great,” Meyer added, “For me the informal lifestyle, the mountains, the people and the willingness to accept folks from different backgrounds” who “let you be an important member of the community was just overwhelming. “It was very evident to me that this was really my hometown. … The culture of Appalachia was just a fit for my soul in a lot of ways. Just kind, good people in East Tennessee.” Having earned a master’s degree in health administration at IU, Meyer’s background includes “working at the Yale School of Medicine” in Connecticut “and the hospital system up in Cleveland.” Also earning a master’s in accountancy at the University of Tennessee, Knoxville, “Now I’m a (certified public accountant)” working with Summit Medical Group “as executive director of value-based care operations … with about 70 employees; registered nurses, social workers, LPNs,” Meyer said. “… It’s our job to support physicians to help them be successful” in their support of patients. “I’m very blessed; Summit is a phenomenal employer. I have a great staff who are innovative,” he added. “I’ve always worked in the health care industry.” As for life in Town, ”My wife and kids and I moved to Farragut seven years ago,” Meyer said about wife, Melissa, and children, Emma and Sophie. This weeks Foundations: 40 Years of Farragut podcast is presented by Alderman Scott Meyer

Already blown away with the Southern hospitality of Knox County before moving to Town (see Profile on this page), “I was even more overwhelmed by the community we experienced at Fox Run,” he added. “I so much wanted to be a part of the (homeowners association) at Fox Run. I’ve just been reminded, over and over, that Farragut is my new hometown.

“Fox Run is not unique — all of our subdivisions have a flavor of that. We have great HOA boards. … Very concerned citizens who contribute to their HOAs.”

As an aldermen since being elected, unopposed, in his first bid for elected office in 2018, Meyer said “he has an obligation” to hear from any and all HOAs and other citizen groups — especially given his own experience.

The combination of hospitality and his work on behalf of Fox Run HOA led him to pursue involvement with Town government, he said, which began with his service on Farragut’s Board of Zoning Appeals, where he remains.

In fact “(Farragut Vice Mayor) Louise Povlin lives two doors down from me,” Meyer said. “She would be giving me gardening advice, constantly.

“… Louise’s passion for Farragut is contagious,” he added. “There was many a night we’d stand there at the cul-de-sac and we’d talk. Just the idea and the history of Farragut resonates with my history as a person.”

As a leader with his Fox Run HOA, “I got an opportunity to get involved civically by leading a grassroots effort to voice our concern about a grocery store and, like, a shopping center (proposed) across the entrance from Fox Run,” Meyer said, though adding, “I didn’t know anything about fighting a development I didn’t believe was good for my property value and for my kids.

“That was the first time I had ever done anything civically where I was out educating my neighbors on Farragut zoning ordinances,” he added.

Specifically, “I organized a petition and I went door-to-door for about two months, and worked with (Town) staff,” Meyer said.

As opposed to resenting the Town for its consideration of this unwanted center, “At that time it really solidified my love for the Town,” he said. “Because in Farragut, unlike in Knoxville, if you’re a resident and there’s something you don’t like, you will be heard,” Meyer added. “You do have a voice.

“If you are polite and kind, and you work with the staff, you can be ever more heard, and you can state your case.”

Going to Town Hall, “I would go to (Farragut Municipal) Planning Commission meetings; I’ve stood up in front of (Board of Mayor and Aldermen) several times and said the layout of the property did not meet setback requirements.

Despite some early “very overwhelming” struggles where Meyer admitted he felt like “‘we can’t fight this,’” in the end “we won. … About 30 percent of all the homes responded to our petition. … Of that sample, 85 percent said absolutely no (to the center).”

Moreover, “We had a great compromise with the developer, and the developer opted to put a little pocket park between Fox Run and the grocery store (site), and that would not have happened had the folks of Fox Run not spoken.”

In doing this, Meyer said it was symbolic of what the Town Founders did in 1979 into early 1980 — though admitting their Fox Run issue didn’t come close to comparing in scale, time and degree of difficulty versus what Farragut Community Group did to incorporate a town.

Still, “I identify with them … it is a sacrifice to put yourself out there and to educate yourself to stand for something,” Meyer said.

The bottom line for Meyer: “I love what I do as an aldermen.”