‘2019 Franchise of the Year’ for Spradling’s Fresh Coat 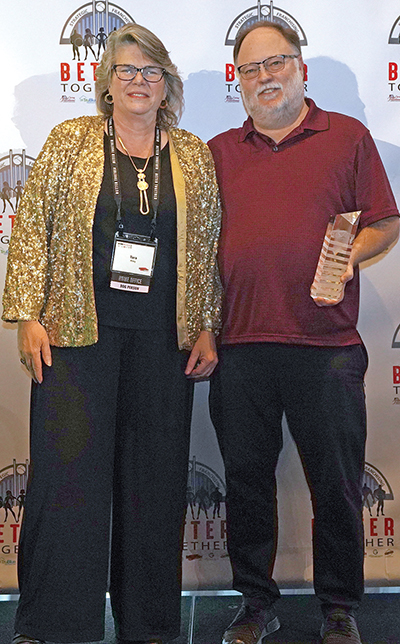 Spradling accepted the 2019 Franchise of the Year Award during a Fresh Coat National Conference in Orlando, Florida, Feb. 4, from Tara Riley, president of the franchise.

“I was actually kind of shocked,” he said about receiving the award. “I’m very honored and humbled to have been selected.

“It’s just a matter of doing what you say you are going to do and taking care of customers,” Spradling added about his business’ success. The award shows “we are doing things right.”

In addition to the franchise award, Fresh Coat Knoxville has won Best of Houzz for five consecutive years.

Spradling noted while there are companies that will outsource their painting jobs to subcontractors, his painters are employed by his business – not subcontractors.

“I hire people I would feel comfortable coming into my home,” he said, pointing out they are bonded and have had background checks.

Fresh Coat Knoxville, which has been in business since May 2015, is part of a franchise encompassing a little more than 150 franchise owners across the country. His company provides interior and exterior residential and commercial painting.

From its humble beginnings, it has grown to a $2 million industry and has gone from two employees to 20 and growing.

He started the business to supplement his and his wife’s retirement. Spradling already had spent 30 years self-employed in the IT industry before taking on a new business. He came across Fresh Coat, and joined the franchise after meeting with its representative.

“One thing I liked about the franchise is all ... are independently owned and operated,” he recalled. “We pretty much run things as we see fit,” but “they do a great job supporting us.”

After the first quote for a job, he realized what he did not know about the business. Plus, he logged in more hours with his business than he expected, not counting his time on his IT job, so he called the franchise company and “begged for my money back.”

That wasn’t an option.

Locked into a 10-year contract and determined to make it work, Spradlin hired Chris Cook, who had more than 30 years in the painting business, and the two grew Fresh Coat Knoxville.

For more information, call 865-245-0999 or visit online at www.freshcoatknoxville.com