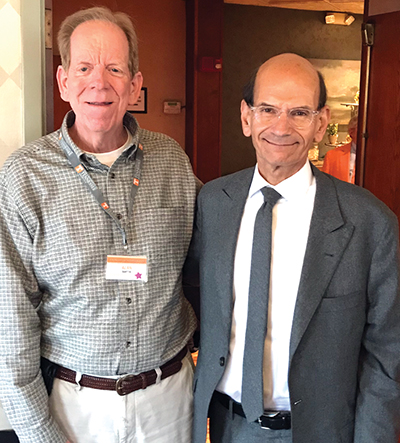 KNOXVILLE — When you enter Bearden High School’s Radcliffe-Kelly Soccer Complex, one of the first people you see is Alan “Red” Barton.

He is always cheerful and cordial, and for more than 15 years has been serving, as an alumni, the highly successful Bulldogs and Lady Bulldogs soccer teams.

Barton is not a coach, but he’s as dedicated to BHS soccer as any coach is or has been. He is one of several on the school’s soccer pressbox crew.

Most of the group’s children have graduated, but the guys all stuck around the program. They now run the pressbox along with Fritz Thumler.

As “the field crew,” many of them worked along Jim Kelly and Rick Radcliffe to construct what is now Turner-Allender Field, the home of Bearden soccer.

Those on the pressbox crew have various duties and can perform a multitude of duties.

But there’s nothing Barton can’t do.

He serves as the game day statistician and handles public address announcing duties when Harris, the longtime “Voice of Bearden soccer,” is not available.

Family of Bulldogs — with a summary

Everybody involved joined the crew when their kids were playing. Barton, a longtime sports fan, first worked in the program when his daughter, Amanda, was playing.

Red threw himself into his duties the following year. He began taking stats and writing postgame summaries that often appeared in area media outlets.

“I began writing summaries, and it was all about positive news,” he said. “The parents loved it. Rick liked them and Eric liked them.”

Ryan Radcliffe liked them, too.

“Ryan and Eric never influenced anything that I wrote,” said Barton, who graduated from BHS in 1970.

A lifelong Tennessee sports fan and staunch Baltimore Orioles supporter, Barton has always had a passion for sports. He once wrote for West Side Story, which later became The Bearden-News Enterprise.

The paper is now farragutpress.

“When I was in college they needed a sportswriter,” he said. “I covered Cedar Bluff Middle School basketball, and we did some UT Swimming stories — and then I wrote a column of my own every week.”

That was a natural job for Barton, who always hung around ballparks during his youth.

“I always liked to hang around the ballfields,” he said. “I went to the old Bearden High School. Every time something was going on, I could always walk there and walk back.

Now, he strives to give fans, coaches, players, officials and sportswriters the ultimate game day experience.

“We want to make it to be a professional experience,” Barton said. “The officials love to come to Bearden.”

The soccer complex is named in honor of Kelly (a longtime soccer supporter) and the Radcliffe family, the first family of BHS soccer: Rick (groundskeeper), his wife, Linda (former Bearden assistant coach) and sons, Derrick (All-state midfielder who helped lead the SoccerDawgs to a undefeated national title seasson in 2002, won two state titles and played at Alabama-Birmingham) and Rick (standout player who helped BHS win the 2006 state title before returning to his alma mater and leading the BHS boys, as head coach, to state titles in 2016 and 2019).

“I say that I’m the boss, but Rick is actually the boss,” said Red, who is retired from First Tennessee Bank after 22 years on the job.