Players said to be much tougher ‘back in the day’ 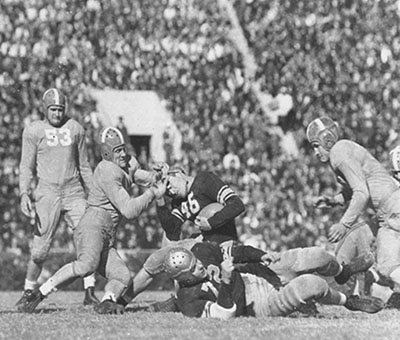 As a high school football coach, I attended many coaching clinics. Those clinics had many formal sessions in which Xs and Os were presented by distinguished speakers.

My coaching mentor, Don Ward, always guided me to the informal sessions where coaches conversed about the Jimmies and Joes and the puzzles that coaches face. These gatherings opened my young coaching eyes to the challenges of the profession.

In 1987 I was in Atlanta at a coaching clinic sipping an adult beverage in an informal session when an older gentlemen, sitting on the stool next to me, began a conversation. We exchanged a little of our backgrounds and began to talk football.

As the conversation grew deeper, he revealed that in the ’40s and ’50s he had coached college football in the Big Ten and told stories about strategies of the victories and losses in his career.

I was locked in.

He also talked about the days that he played in the 1930s and how he has no patience with the brittleness of the modern-day players. He went on to explain how the men he coached and played with were tougher than the generation that was then playing: “Any boy in proper condition can play a full game of football,” he said. “They speak of a 60-minute player as if he were an iron man. There isn’t any such thing as a 60-minute player.

“A man who plays through an entire game is a 14-minute player because that is the average time during the game that the ball is in play. Anyone in shape should be able to play that long, especially when he has two hours and a half or so to spread it over,” he continued. “All I know is that in the old days we didn’t have the 10,001 injuries that we have today.

“If we had had, we simply couldn’t have played football because we didn’t have so many substitutes. Football was just as bruising and just as rugged as it is today. Moreover, equipment then wasn’t as good as it is now. But the boys didn’t seem to mind it.”

I had many interesting conversations at coaching clinics and watering holes — unfortunately never the fiction described above.

The conversation did occur, though, when famed UPS sportswriter Henry McLemore was at the Rose Bowl Luncheon Dec. 30, 1939, in Pasadena, California, listening to speakers describing the toughness of the Southern Cal Trojans and the Tennessee Vols, which were led by then Maj. Robert Neyland (The Trojans won that Rose Bowl 14-0).

The man sitting next to Mr. McLemore was the coaching icon Fielding Yost.

Yost showed the sports writer a photo of his 1902 University of Michigan football team that defeated Stanford in the first Rose Bowl. The coaching legend then went on to describe his lack of patience for the “modern” player in the words I quoted above.

Those of us in modern times have always talked about how much tougher play was in our day. We go from generation to generation describing “back in the day.”

Coach Yost said it 80 years ago, describing his rugged 15 Michigan players who traveled to California more than what is now 100 years ago to win that first Rose Bowl.

We reach back in time to when we were young to the fantasy of how much tougher we were.

It will never end.