A heart for ‘kids without food,’ teen starts vanilla non-profit 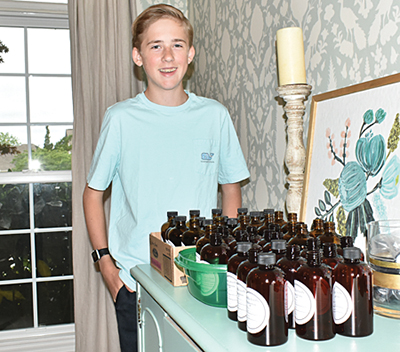 Rising Farragut High School freshman William Cabaniss has always had a heart for those living with hunger issues.

“He always had a soft spot for kids who were without food,” said his mother, Jillina Cabaniss. “It has always really bothered him that someone could truly be hungry. As a young child he even donated his allowance money to hunger-related causes.

“His heart really is, and has always been, to help.”

It was for them — and so many others — that this rising Farragut High School freshman launched “Vanilla Feeds Tomorrow” Sunday, May 14, a non-profit benefitting Second Harvest of East Tennessee.

In a very unique kind of non-profit, William prepares vanilla extract — with some supervision from Jillina and his father, Mark Cabaniss — and has been selling it in 8-ounce bottles. In just two short weeks, the venture received orders from 13 states, sold completely out of William’s initial batch, and raised more than $4,000, William reported last week.

“It has really warmed my heart how many people have been placing ordersand just seeing that desire to help people, and the kindness and support — it has really been overwhelming,” Jillina said.

It was while making favorite family treats earlier this year that William’s interest in the unusual project began to take hold.

“My family makes a lot of brownies, and one time they had a few friends over, and I just kept adding vanilla to the batter,” he said. “I realized later what made them so good was the flavoring.”

Almost simultaneously, the COVID-19 pandemic hit, and William was struck by the outages being faced by Second Harvest and other food pantries.

“I know people were doing a lot more baking during the pandemic, too,” he said. “I thought I could sell vanilla extract, and contribute to the food banks, since they needed monetary donations.”

William began researching in earnest with the full support of his family, which includes his younger siblings, Andrew and Katherine.

“First, I started looking at beans and where they were from, how much they cost and if the taste would equate to a product people would actually buy,” he said.

The process became a huge undertaking, “with quite a learning curve,” William said.

He eventually settled on vanilla beans from Madagascar, which he cuts in a process than can take up to five hours. He then cooks them and adds other ingredients before placing the mixture in the family’s kitchen pantry to set anywhere from two weeks to six months, depending on what end results William hopes to achieve.

“The longer it sets, the better it will be,” he said.

When sufficiently cured, he pours the vanilla into 8-ounce bottles with his self-designed company logo. Each bottle is $30, the sale of which feeds 42 people.

Jillina provides free delivery service in Farragut, but for outside the area the cost is an additional $5.50 to mail.

“The main thing he asked me to do was to get the word out,” Jillina said. “The rest has all been William — that has been the gift of youth and the Internet.”

“Second Harvest is beyond fortunate to have William Cabaniss supporting his East Tennessee neighbors who are at risk of hunger through Vanilla Feeds Tomorrow,” said Rachael Ellis, director of development for Second Harvest.  “He is making a difference in the lives of thousands of people, and we are forever grateful for his generosity.  It is an honor to have his support, and we look forward to having him as part of our food bank family for many years to come.“

For more information, or to place an order to help this cause, visit www.vanillafeedstomorrow.com