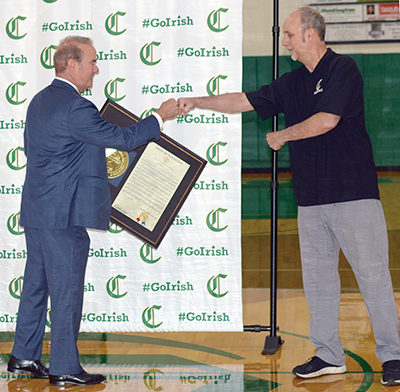 KNOXVILLE — Schools have been closed for more than two months, and the halls at Knoxville Catholic High School were relatively quiet Monday morning, June 1.

But the gym opened briefly for the boys basketball team to receive some much-deserved recognition from the Tennessee General Assembly House of Representatives.

The Irish won the Division II-AA state championship Saturday, March 7, less than a week before the COVID -19 pandemic brought an end to high school classes and sports.

Head coach Mike Hutchens, who has led the Irish program for more than 30 years, joined his coaching staff, KCHS athletic director Jason Surlas and rising junior B.J. Edwards, state tournament MVP and a “Mr. Basketball” finalist for Division II-AA, who returned to the school gym for the first time since March to join those being honored by state Rep. Martin Daniel (R-District 18, Knoxville).

Daniel appeared on behalf of the entire House to present a Proclamation honoring Hutchens and his team.

“First of all, I’m just happy for the kids because they’ve worked so hard,” Hutchens said. “The emotional state that we’re in hasn’t come down since we won this thing.

“... The biggest thing about this team is its unselfishness,” he added. “You have a lot of (NCAA) Division I talent on the floor for us.”