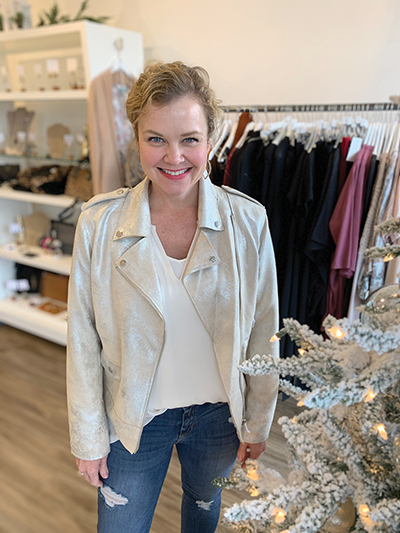 With retail in her family line, Meagan Puckett carries on the memory of her grandmother by naming her boutique, Virginia Jane Clothing + Gifts.

The shop, which carries women’s apparel, handbags, jewelry and gifts at 9430 S. Northshore Dr., near Pellissippi Parkway, re-opened for business May 1.

“There were lots of higher-end stores, and lots of less expensive stores, but we were really missing that mid-range price point,” she added. “They are boutique lines typically not found in department stores.

While the store was closed from mid-March until May 1, Puckett said she worked quickly to get a website launched.

“We were able to continue (doing business), but it only brought in a fraction of it,” she said.

Puckett opened the business two years ago at its current Northshore location. Before that, she worked out of a small space in a Bearden shop.

“Virginia” was her grandmother’s name.

“I always wanted to honor my grandmother,” she said, “She worked in a retail store until she was in her 90s.”

The boutique owner has more than 20 years experience in the retail and fashion industries.

“My first job out of college was in a boutique in Birmingham, Alabama,” Puckett recalled. “I had a really great mentor who taught me all about the business. I worked there for five years. My husband and I have lived in different states.

“In living different places, I’ve been a manager and buyer for different boutiques,” she added. “I’ve done wardrobe consulting. I’ve sold trunk show lines of clothing and jewelry, but opening a store has been a long-term goal.”

Mondays are by appointment only.

As Phase 2 takes effect, Puckett said she hopes to return to normal hours, which are from 10 a.m. to 5 p.m.

“We’re really trying to give the customer who’s not comfortable being out and around in the general public an opportunity to come in, by herself, and shop on Mondays,” she said.

“... We have a local product, Ionoture, a sanitizing spray made in Knoxville, that we use to sanitize the clothes,” she added.

For more information, call 865-219-5023 or visit her website at www.virginiajaneshop.com