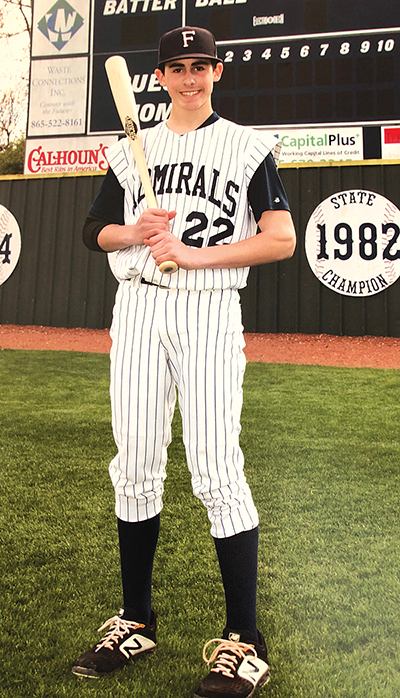 Jake Wurms prides himself on being a team player.

And like many high school baseball players, the rising Farragut High School senior spent most of the 2020 spring sports season on the sidelines as the country and the world was hit with the COVID-19 pandemic.

Wurms and the rest of the Admirals had high hopes for the 2020 campaign as they were coming off a Class AAA state championship in 2019. It was a title FHS didn’t get the chance to defend.

Wurms, who played second base as a freshman and sophomore for the Ads, was going to move to first base 2020 as he enjoyed a growth spurt.

But there’s another position Wurms may be playing in 2021: on the mound.

Things changed last month. Wurms’ Travel coach, Brett Carroll, encouraged him to attend a PBR Showcase event as a two-way player, meaning he would go through position and hitting drills in the mornings.

But he would then return to go through pitching workouts in the afternoon.

“We went and Brett Carroll told me that I should register Jake as a two-way player,” said Jerry Wurms, Jake’s father, a retired law enforcement officer from South Florida.

Jake worked out as a pitcher and hit 88 mph with his fastball, and also hurled some effective off-speed stuff. Jake’s work on the mound astonished his father.

“I never knew he could pitch,” Jerry said of his son. “He hasn’t really pitched. He hasn’t pitched since he was 12 years old and in Little League.

Carroll, however, wasn’t as shocked.

“Jake is a team player, and in the summer we were getting thin on pitching, and he was kind enough to go out there and fill up some innings for us,” Carroll said. “It’s ideal for his frame. He’s new at this, but he’s working at it.

“His throwing motion is unorthodox when he is in the field, but when he’s on the mound I like the way the ball comes out,” the coach added. “This only makes him more versatile as a player. An opportunity comes when you’re an humble and team-first player.”

BC Athletics coach Shawn Hughes took video of Jake on the month and sent it to Matt Buckner, baseball Admirals skipper, who immediately got excited.

“He (Buckner) saw (the video) and he called me in and said ‘you didn’t tell me you could pitch.’ He was so excited,” Jake said. “Now, I’m working hard and I’m looking forward to being a steady performer in his rotation next year.”

The bottom line? “I want to do what I can to help my team, and I want to get the opportunity to play in college,” Jake said. “We haven’t had any games. ... I’m continuing to work on my mechanics.”